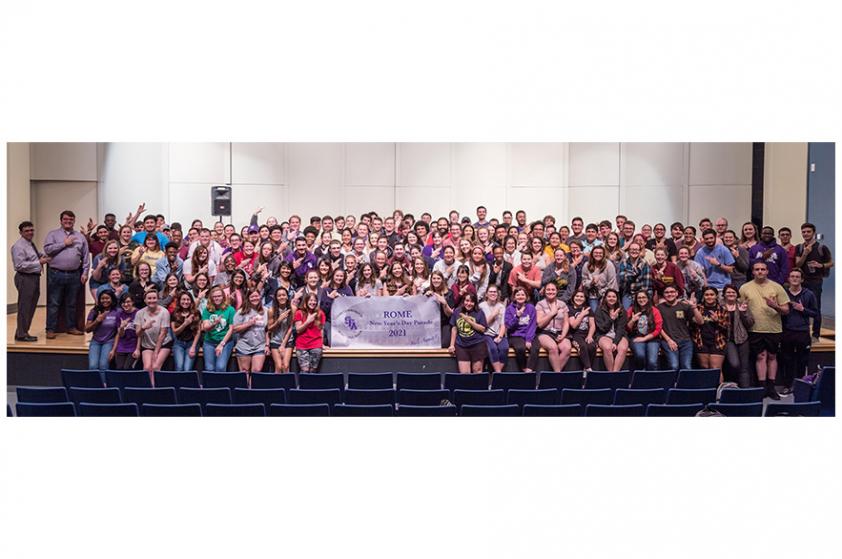 
NACOGDOCHES, Texas – The Lumberjack Marching Band at Stephen F. Austin State University has accepted an invitation to march in the 2021 New Year’s Day Parade in Rome, Italy. The announcement was made to band students Thursday afternoon by Associate Director of Bands and LMB Director Dr. Tamey Anglley.

The band has represented SFA and Nacogdoches in prestigious venues across the nation and around the world, previously marching in the Macy’s Thanksgiving Day Parade in New York City, the New Year’s Day Parade in London, England, and in the St. Patrick’s Day Parade in Dublin, Ireland.

“Getting an invitation to march in the Macy’s Parade makes you one of the best bands in the world,” Anglley said. “So from there we got invitations to march in parades all over the world.

“Well over 50 million people across the world have seen our band,” she said.

These experiences have not only had an impact on the students who participated, but the worldwide exposure has impacted recruiting and branding efforts of the university in a positive way, Anglley said.

In addition to performing in the Rome parade and in other venues, band members and alumni will visit the Colosseum, Roman Forum, the Vatican and Sistine Chapel. They will take a train ride through the hills of Tuscany to Florence for a walking tour of the city and to visit art galleries.

On the day of the parade, the band will march down the main thoroughfare of the city directly into St. Peter’s Square where the students will perform.

“After that, we will hear the Pope give his New Year’s Day blessing,” she said. “This will be a once-in-a-lifetime experience.”

On Jan. 1 each year, tens of thousands gather in St. Peter’s Square, filling the streets with pageantry and music, to celebrate and receive the Pope’s New Year’s Day blessing. A focal point of Rome’s holiday season and the World Day of Peace, the Rome New Year’s Parade celebrates life, cultural diversity and international goodwill.

Because of this observance of peace, the parade is also considered a peace march, Anglley explained. In conjunction with this observance, the Lumberjack Marching Band will participate in a community service project by collecting warm-weather clothing during the months leading up to the trip. The clothing will be shipped to Rome to be distributed by band members to Rome’s homeless shelters.