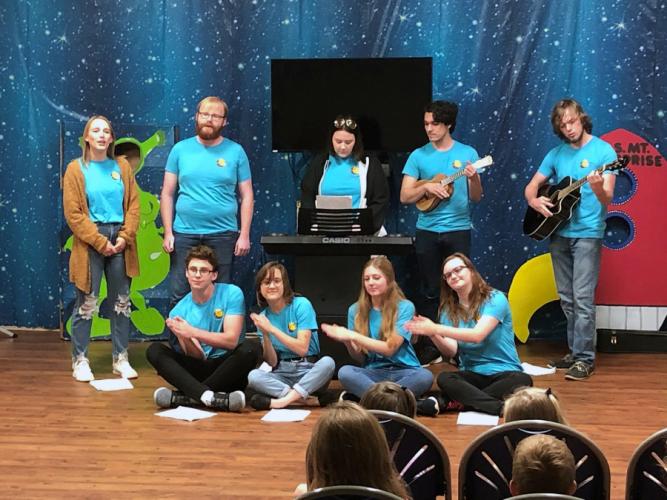 Stephen F. Austin State University theatre students involved in the School of Theatre’s SummerStage Festival have entertained young and old at East Texas libraries and at the Texas Blueberry Festival in downtown Nacogdoches. SummerStage posters are all over town. Ads and feature articles are in local newspapers. Students interviews have been heard on area radio stations.

But the only place to experience the SummerStage Festival is in W.M. Turner Auditorium in Griffith Fine Arts Building on the SFA campus. Sponsored by Tipton-Ford-Lincoln, the festival, which runs June 27 through July 12, features the musical comedy “The 25th Annual Putnam County Spelling Bee” and the beloved children’s story “The Reluctant Dragon.”

Based on the book by Kenneth Grahame and adapted by Mary Hall Surface, “The Reluctant Dragon” is the charming tale of an unlikely friendship between a young boy and a peace-loving dragon, and it’s about overcoming prejudice and fear in a small medieval domain. Theatre students have been taking the tale on the road where area children have enjoyed a sampling of what’s to come when the play opens the festival on Thursday, June 27.

“The children at the library performances really seemed to engage with our actors, and that was only a reading of the story,” said Dr. Slade Billew, assistant professor of theatre and director of “The Reluctant Dragon.” “I know that young people and adults alike will connect with the full performance and enjoy the fun and energy of the show.”

Attending a live theatre production like “The Reluctant Dragon” together as a family can strengthen relationships, according to Cleo House, director of the School of Theatre.

“Theatre inspires creativity in children, and a by-product of that creativity is self-expression and the ability to problem solve,” House said. “Of course, it is a fun time for them and the entire family. Believe it or not, research shows that families that attend the theatre together can increase their bonds to each other. It’s helpful to know that while you’re attending the theatre, you are doing many positive things at once.”

“The 25th Annual Putnam County Spelling Bee,” with music and lyrics by William Finn, book by Rachel Sheinkin, conceived by Rebecca Feldman, with additional material by Jay Reiss and originally directed on Broadway by James Lapine, is about an eclectic group of sixth graders who make their way through a spelling competition where each, eager to win, reveals his/her hopes, struggles and passions through songs. The play will be presented at 7:30 p.m. July 3, 5, 8, 9, 10 and 11, and at 2 p.m. July 9 and 12. General admission tickets are $15 for adults, $10 for seniors and $5 for students/youth. This show has some adult themes and is recommended for mature audiences (PG-13).

Pay-what-you-can performances for both SummerStage shows are on July 8.

All performances are in Turner Auditorium. Griffith Fine Arts Building is located at 2222 Alumni Drive. For tickets or more information, call the SFA Fine Arts Box Office at (936) 468-6407 or visit www.theatre.sfasu.edu.