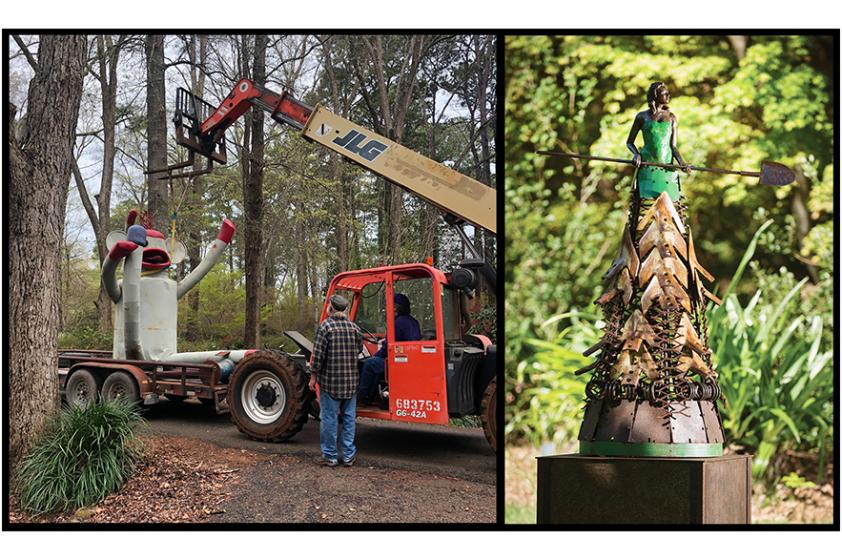 Sculpture For All: SFA to open 2019-21 biennial outdoor exhibition

Pictured left: SFA heavy equipment operator Randy Holland assists artist Joe Barrington in delivering Barrington's "Sock Monkey" sculpture as one of the first installations of the 2019-21 Sculpture For All exhibition in Ruby M. Mize Azalea Garden on the SFA campus. Right: Artist Teresa Lind's "The Farmer" is now part of SFA's permanent collection of Sculpture For All art.


NACOGDOCHES, Texas – Continuing to make art bloom throughout the gardens on the campus of Stephen F. Austin State University, Sculpture For All 2019-2021 will open with a public reception at 3 p.m. Saturday, April 27, in the Ruby M. Mize Azalea Garden.

Sculpture For All is a biennial outdoor exhibition and competition in the form of a joint partnership project that brings together faculty, staff and students from the SFA School of Art and the Arthur Temple College of Forestry and Agriculture.

This year’s opening coincides with International Sculpture Day, according to Jeffery Brewer, assistant professor of art (sculpture) at SFA.

“This outdoor artistic endeavor seeks to expose SFA students and faculty members to art they might not otherwise see while bringing national recognition and publicity to SFA,” according to Brewer.

This year’s competition was juried by Robbie Barber, associate professor of art (sculpture and 3-D design) at Baylor University. The exhibition will showcase the work of eight artists, including Barber.

“It’s an all-star cast of Texas sculptors and will make for a fabulous show,” Brewer said.

Barber received his B.F.A. in sculpture from East Carolina University in Greenville, North Carolina, in 1987, and his M.F.A. in sculpture from the University of Arizona in 1991. He also studied in Cortona, Italy, through the University of Georgia Studies Abroad Program. In 1991, Barber was awarded a yearlong residency at the Roswell Artist-in-Residence Program in Roswell, New Mexico. After returning to North Carolina in 1992, he received a Southern Arts Federation/NEA Regional Visual Arts Fellowship in Sculpture and a North Carolina Arts Council Visual Artist Fellowship, both in 1993. In 1994, Barber moved to Wichita Falls to teach Sculpture and Metalsmithing at Midwestern State University. He left in 2000 to teach at Baylor University in Waco  where he is currently associate professor of sculpture.

In 2007, Barber was a founding member of the Texas Atomic Iron Commission, which is comprised of sculpture educators dedicated to the dissemination of iron casting as an approach to art making. Through this organization, he has presented workshops, participated in iron pours throughout Texas and Alabama, and he has been invited to Keen Foundry Invitational Iron Casting Symposiums in Houston. He has exhibited widely throughout the United States, including exhibitions at Socrates Sculpture Park in Long Island City, New York, the Fort Lauderdale Museum of Art in Fort Lauderdale, Florida, the Grace Museum in Abilene, Grounds for Sculpture in Hamilton, New Jersey, and at Redbud Gallery in Houston.

With a donation from the Four Seasons Garden Club of Nacogdoches, SFA has purchased last year’s people’s choice winner, “The Farmer” by Teresa Lind, making it the third in SFA’s permanent collection of Sculpture For All art.

For more information about Sculpture For All, call (936) 468-4404 or email sculptureforall@sfasu.edu.