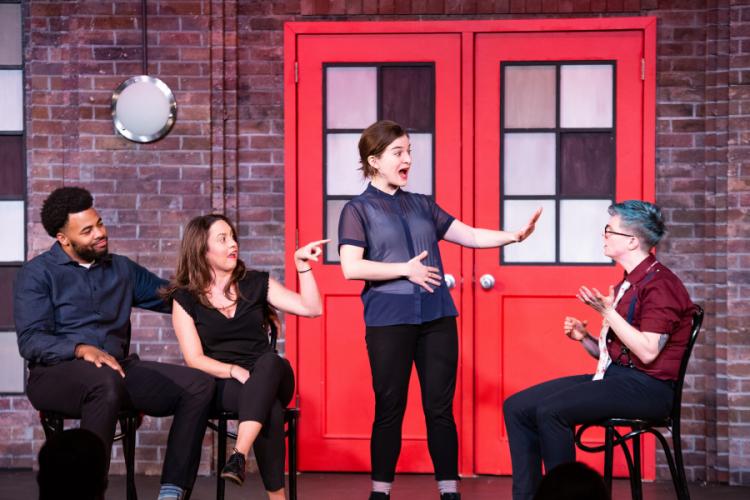 Comedy-improvisation ensemble The Second City brings world-class entertainment to the SFA campus with a performance at 7:30 p.m. Friday, Sept. 6, in W.M. Turner Auditorium. Terrence Carey, far left, and Olivia Nielsen, third from left, are among the cast members who will perform in Nacogdoches.


NACOGDOCHES, Texas – The Stephen F. Austin State University College of Fine Arts will bring the newest comedy improv stars to Nacogdoches with a University Series presentation of The Second City at 7:30 p.m. Friday, Sept. 6, in W.M. Turner Auditorium, but the performance is only half of the legendary troupe’s visit to SFA. Prior to the show, these professional Chicago-based comedians will share their techniques and insights with students in the SFA School of Theatre who hope to one day earn a living by making people laugh.

One of the missions of the University Series is to bring renowned performers to campus to model professionalism and share their experience and skill. These guest artists often engage with students in masterclasses and workshops in various musical genres, dance and theatre performance.

“In recent years, our music students have benefited from discussion with jazz master Branford Marsalis and sung under the baton of Chanticleer’s music director,” said Scott Shattuck, associate dean of the College of Fine Arts and director of the University Series. “SFA dance students have taken masterclasses with members of Paul Taylor’s company and the Moscow Ballet. Now we’re thrilled that our student improvisers will get to learn from and work with members of The Second City.”

The Second City’s touring company that will perform in Nacogdoches includes cast members Maureen Boughey, Terrence Carey, Maya Haughton, Ben Larrison, Olivia Nielsen and Griffin Wenzler. They will be accompanied by Sam MacNerland, stage manager, and Stuart Mott, music director. They will conduct a workshop with members of Improv Strikes Back, an SFA student organization devoted to the art of improvisation. A few of those students will join the The Second City cast on stage during the performance encore.

“We are so excited!” said Jackie Rosenfeld, senior lecturer in the SFA School of Theatre and faculty advisor for Improv Strikes Back. “Getting to see a live performance by a professional improv troupe in Nacogdoches is such a great experience for all our students, but it’s an especially tremendous opportunity for our students who get to spend Friday afternoon working one-on-one with members of The Second City. They’ll learn important techniques, new games and ensemble-building exercises. It’s simply priceless!”

The Second City began as an unconventional approach to both theater and comedy. Its performers, including soon-to-be superstars Joan Rivers, Gilda Radner, Dan Aykroyd and John Belushi, soon propelled the troupe into the international spotlight. The Second City also launched the careers of Chris Farley, Martin Short, John Candy, Mike Myers, Rick Moranis and other comedic actors. Some of today’s top screen performers, including Oscar nominee Steve Carell and Emmy Award winners Tina Fey and Stephen Colbert, are also alumni of the ensemble.

Today, The Second City is a world-class entertainment company, continuing to produce premier talent in all three of its locations – Chicago, Toronto and Hollywood – and entertaining more than one million audience members a year. In addition to its own stages, Second City Touring Companies perform electrifying revues and original productions across North America and abroad.

This performance is recommended for mature audiences.

Prior to the SFA performance, Rosenfeld will present an informative talk at 7 p.m. in Griffith Gallery. The gallery is located across the hall from Turner Auditorium, which is inside the Griffith Fine Arts Building, 2222 Alumni Drive. The audience is invited back to the gallery for a post-performance reception to meet the performers.

Single event ticket prices for the University Series are $30 for adults, $24 for seniors, $15 for SFA faculty and staff and $12 for non-SFA students/youth. Tickets for SFA students are $3.  Season tickets are still available and offer consistent seating throughout the season as well as additional discounts.