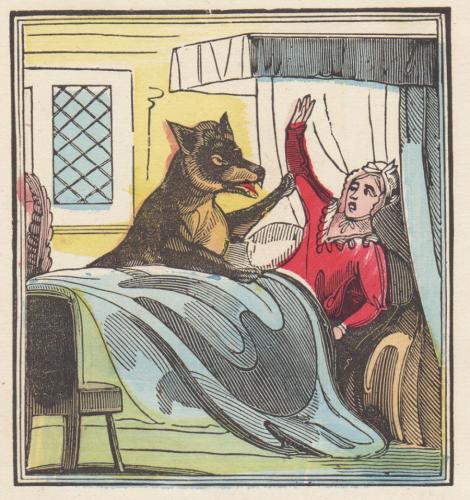 The hand-colored woodcut print “Red Riding Hood,” McLoughlin Brothers, New York, 1860, is among the works in the exhibition “Picturing Books: Illustrations in Print from the 15th to the 20th Centuries,” Vol.  I, opening Thursday, Oct. 31, and running through Jan. 5 in The Cole Art Center @ The Old Opera House.


NACOGDOCHES, Texas – The Stephen F. Austin State University School of Art and SFA Art Galleries will present the exhibition “Picturing Books: Illustrations in Print from the 15th to the 20th Centuries,” Vol.  I, opening Thursday, Oct. 31, and running through Jan. 5 in The Cole Art Center @ The Old Opera House.

Curated by Dr. John Handley, director of SFA’s art galleries, and Dr. David A. Lewis, professor of art history, the exhibition, presented in two volumes, will offer a series of “chapters” that explore the evolution of the printed illustration, beginning with the Incunabulum (meaning the first 50 years of the printed book), including the Nuremberg Chronicle of 1493 and continuing up to the 20th century. Volume II will be presented in the early spring semester and will run through March 29.

“This exhibition will present a major art form that is often overlooked, even though it is the most familiar of them all,” Handley said. “Book illustration historically has consisted of original prints in such media as woodcut, wood engraving, etching, copperplate engravings, and later, lithography and process printing using photo mechanical techniques. As such, this show links the graphic arts with fine arts, since books are not only illustrated but connect those images to text.”

The printing press with moveable type was invented by Johannes Gutenberg in the early 1400s, producing the now famous Gutenberg Bible by the middle of that century. Printed illustrations appeared with greater frequency by the end of the 1400s. One of the most famous of these was the Nuremberg Chronicle (a sweeping history of the world from a Christian perspective) beginning in 1493. By the early 1500s, printed illustrations were common place in both religious works, produced by woodcut blocks and, increasingly, copperplate engravings, according to Handley.

“The exhibition will be organized like a book into volumes and chapters,” Handley explained. “Volume I will include biblical themes and human and natural history. There will also be a section of children’s books dating from the early 1700s onward.”

Because the exhibition contains books and other printed items that are hundreds of years old, the materials will be displayed under protective glass. Viewers will be able to “see” additional pages in the books by scanning codes on mobile devices, including phones.

A reception for Volume I works will be at 6 p.m. Thursday, Nov. 7, at Cole Art Center. Art exhibitions and receptions are sponsored by the Friends of the Visual Arts, Nacogdoches Junior Forum, William Arscott and The Flower Shop. Admission is free.