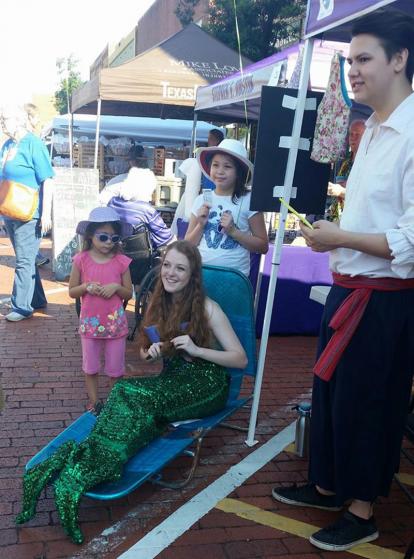 
NACOGDOCHES, Texas – Activities in and around The Cole Art Center @ The Old Opera House on June 8 will add to the traditional food, fun and festivities of the annual Texas Blueberry Festival with Stephen F. Austin State University’s art and theatre students showcasing their talents as part of the day’s festivities.

Students from the School of Theatre dressed as popular characters from fairy tales and children’s stories will again greet those attending this year’s downtown event as they promote the upcoming SFA SummerStage Festival.

The School of Theatre’s trademark dragon character, Schlaftnicht, from the children’s show “Trudi and the Minstrel,” performed the summer of 2005, will make his annual Blueberry Festival appearance along with a number of whimsical characters. Children (and adults) will have the opportunity to talk with the students and take photos with the costumed characters, according to Angela Bacarisse, professor of design and arts management at SFA.

Another screening of the popular film “Found Footage: Rediscovering Nacogdoches” will be at 10 a.m. and 2 p.m. in the art center. Discovered at Nacogdoches High School in 1967 but forgotten until a few years ago, the film was digitally restored and viewed in 2014 for the first time in 70 years.

There will also be a display of SFA art students’ work.

This year’s SummerStage Festival features the children’s favorite “The Reluctant Dragon,” based on the book by Kenneth Grahame and adapted by Mary Hall Surface, and the musical comedy “The 25th Annual Putnam County Spelling Bee,” with music and lyrics by William Finn, book by Rachel Sheinkin, conceived by Rebecca Feldman, with additional material by Jay Reiss and originally directed on Broadway by James Lapine.

Theatre students will offer face painting as a fundraiser for their biennial study abroad trip to the Edinburgh Festival Fringe in Scotland. For the third time, SFA theatre students will tour a play that will be seen at the largest performing arts festival in the world during a two-week trip to Edinburgh in August. This year, SFA dance students will be among those performing. This year’s play is “Tales of Neverland,” a stage adaptation written by Bacarisse based on the book “Peter Pan,” J.M. Barrie’s most famous work.

June 9 is the final day to view the Texas National exhibition and “Image and Text Collaborations: A 20-Year Celebration of SFA Book Arts” currently showing in Cole Art Center.

For performance times and ticketing information for the SummerStage Festival, visit theatre.sfasu.edu or call (936) 468-6407 or (888) 240-ARTS. Performances are in W.M. Turner Auditorium in the Griffith Fine Arts Building on the SFA campus.