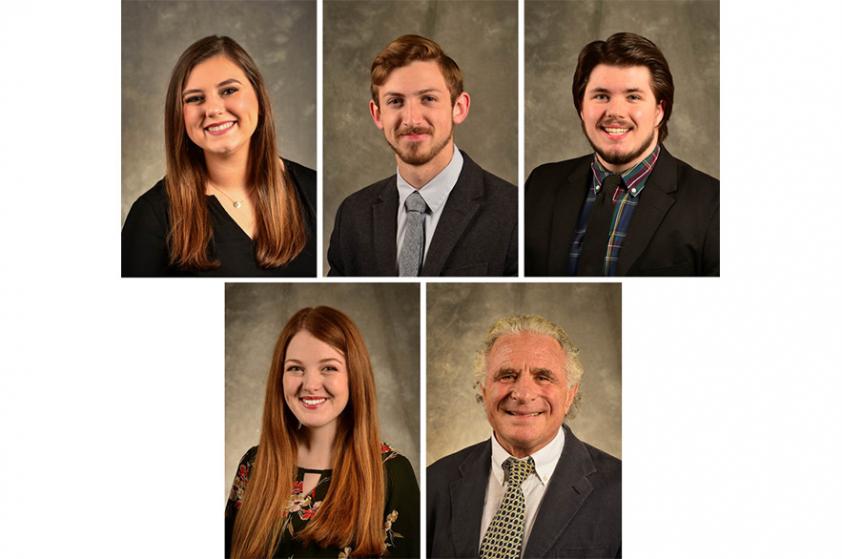 Sarah Bone, art major from Richmond; Travis Wattigney, music major from Fort Worth; Matthew Mitchell, music education major from Huffman; and Aubrey Moore, theatre major from Frisco, were selected by the faculty of their respective schools on the basis of their potential to further develop their artistic goals and serve as role models, according to Dr. A.C. “Buddy” Himes, dean of the College of Fine Arts.

“The Dean’s Awards are about inspiring students and giving them the self-confidence to dream what the ideal could be for them, then, through this award, make that dream become their reality,” Himes said. “And, in doing so, we hope to inspire others to likewise reach for their dreams.”

The awards were established by the Dean’s Circle, an external support organization of community members founded in 2008 and dedicated, in part, to nurturing potential young artists within the College of Fine Arts, Himes explained.

“Many academic units, at this time of year, have awards of some type that recognize their students,” he said. “What makes the Dean’s Awards distinctive is that these awards are not about what the masses have done, they are about what the few are capable of doing.”

Additionally this year, a distinguished panel of senior Fine Arts faculty members selected School of Art professor Piero Fenci as the Dean’s Circle Endowed Professor for 2019-2022. The Dean’s Circle created the award in 2016 to recognize and honor those who “embody the qualities of the ideal professor that characterize all College of Fine Arts faculty members,” Himes said. The first honoree was Dr. Charles R. Gavin, professor of horn and chamber music in the SFA School of Music. Over the three-year term of the award, the recipient receives a total of $15,000 above his/her base salary. The award is intended to provide the resources for all manner of professional endeavors in which the recipient may choose to become involved, Himes said.

“The Endowed Professorship now goes to Piero Fenci, not as an individual, but as a symbol of the excellence in teaching, commitment to student preparation, and dedication to one’s art form that is characteristic of all faculty members in the College of Fine Arts,” Himes said.

Fenci received his undergraduate degree in Latin-American studies with a minor in art history from Yale University. He earned his M.F.A. from the prestigious New York State College of Ceramics at Alfred University. Fenci has been with SFA since 1975 and has distinguished himself as both an artist and an educator. His ceramic vessels have been featured in Ceramics Monthly, American Ceramics, The Contemporary Potter and Clay and Glazes for the Potter. In 2004, he founded the first university program in contemporary ceramic art in the history of northern Mexico at la Universidad Autonoma de Chihuahua in Chihuahua City, and he continues to travel there yearly to mentor the program. Fenci has earned an international reputation as a ceramist, exhibiting his work from coast to coast and in Italy, Russia and Mexico. He was recently named “Texas Master” by the Houston Center for Contemporary Craft, becoming the fourth person (and the first ceramist) in the state to be honored with the award. Fenci lives and shares a studio with his sculptor wife, Elizabeth Akamatsu, in the small town of Appleby north of Nacogdoches. His work is represented in private and public collections, including the Museum of Fine Arts, Houston; the Schein-Joseph International Museum of Ceramic Art, Alfred, New York; and in the Tyler Museum of Art, Tyler.

Bone, who will receive the Ed and Gwen Cole Dean’s Award in Art, is a junior from Richmond pursuing her Bachelor of Arts in graphic design with a minor in marketing. She serves as president of the Art Alliance and the SFA chapter of the American Institute of Graphic Arts, and she is on the planning committee for The Big Event. In the fall of 2018, she competed in the American Advertising Federation’s Student Competition with a team of SFA student designers, marketers and managers. In May 2018, Bone traveled to Iceland as one of 10 student artists chosen for a residency at the Baer Art Center. Her work from the residency was included in the exhibition “Radljost” in May 2018 and in “Endless Dusk” in September 2018. She is a recipient of the Academic Excellence Scholarship and the Regent’s Scholarship for Art. She has been on the Dean’s List or President’s List every semester at SFA. Bone works as a teacher’s assistant for the art section of SFA 101. She has worked as a promotions assistant for the campus recreation center, and she will begin an internship this spring as a junior graphic designer with Aramark. Each summer, she continues working as a mentor in UMARMY, a service mission group of her hometown church. In the future, Bone hopes to work as a creative in the advertising and marketing field.

Wattigney, who will receive the Naioma Shannon Dean’s Award in Music, is a junior from Fort Worth studying music composition under Dr. Stephen Lias. In his time at SFA, Wattigney has received numerous honors and awards as a composer, performer and student. As a composer, his works have been performed both at SFA and across the U.S. His piece “The Awakening Valley” for orchestra was chosen as the winning composition for the 2018 Tennessee Valley Music Festival Call for Scores in addition to being selected for performance by the SFA Orchestra of The Pines. Wattigney has also had several commissions and had two pieces showcased at regional conferences. As a trumpet player, he has participated in the Wind Ensemble, Swingin’ Axes jazz band, the Lumberjack Marching Band, the Roarin’ Buzzsaws and several chamber ensembles. As a member of a trumpet quintet, he has been two-time quarter finalist in the National Trumpet Competition and selected as a prelude performer for the 2018 International Trumpet Guild Conference. He has also received the honor of being named the Top Scholar for the 2019 Undergraduate Research Conference, and he was a finalist in the 2018 conference. Both presentations were in collaboration with the Sound Recording Technology program in the School of Music.

Mitchell, who will receive the Dr. Robert G. Sidnell Memorial Dean’s Award in Music Education, is a junior voice major from Huffman studying under Debbie Berry. Mitchell states that he came to SFA to become a better musician, educator and overall leader, and over the course of his education, he said he has learned “just that and much more.” During his time at SFA, Mitchell has been on the President’s List every semester. He has been a member of the Honors College, A Cappella Choir (vice president), Madrigal Singers, SFA Opera Theater, Phi Mu Alpha Sinfonia and Pi Kappa Lambda honors music fraternity. In addition to the Dean’s Award, he has been the recipient of many other honors, some of which include the HOOPS for Scholar, the TLL Temple Scholarship and the Academic Excellence Scholarship. He is the 2016 Anderson Scholar, awarded by the voice faculty for academic and vocal excellence. Following graduation, Mitchell plans to become a high school choir director and eventually pursue a master’s degree in conducting. With his education, he hopes to teach his students what he has learned through his years at SFA – “they are loved, they are worth it and they can do it.”

Moore, who will receive the George and Peggy Schmidbauer Dean’s Award in Theatre, is a senior theatre major from Frisco. She is pursuing a Bachelor of Fine Arts degree with an emphasis in performance. While at SFA, Moore has acted in several theatre productions, including “The Skin of Our Teeth,” “The Miracle Worker,” “Baby with the Bathwater,” “Hot Flashes,” “The Women of Lockerbie” and “Cat on a Hot Tin Roof.” She has also worked on wardrobe crews for “Pitching to the Star,” “Mr. Burns, a Post-Electric Play,” “Antigone in New York” and “Sweat.” For “The Women of Lockerbie,” she received an Irene Ryan Acting Nomination from the Kennedy Center American College Theatre Festival. In addition to her production work, Moore is a member and president of the Beta Phi cast of Alpha Psi Omega, the National Theatre Honors Society. As a member of this organization, she actively participates in projects involving the School of Theatre and the Nacogdoches community. She has completed more than 100 service hours this past year. Moore is also an elected member of the Student Production Advisory Committee for the School of Theatre. She has remained on the President’s List or Dean’s List since her first semester at SFA.

The student awards are made possible because the Dean’s Circle believes in investing in the future and is willing to contribute and raise the money needed to fund these $3,000 individual awards each year for a total of $12,000, Himes said. For more information about the Dean’s Circle, contact Himes at himesac@sfasu.edu or at (936) 468-2801.