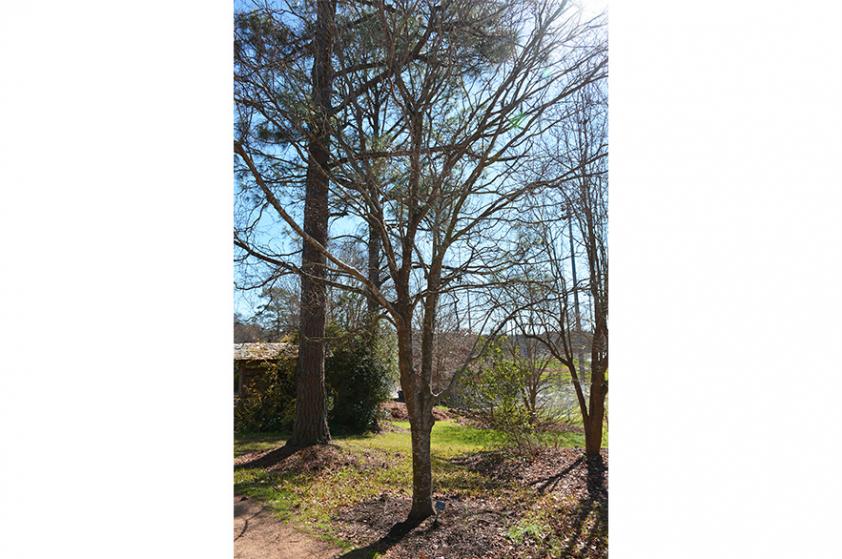 This chalk maple, which will be added to the Texas Big Tree Registry during a ceremony at 11 a.m. March 1, on the SFA campus, will soon bloom into its full glory. The tree stands 28 feet tall with a circumference of 34 inches and a crown spread of 30 feet, which is an impressive size for this rare maple.

The ceremony will begin at 11 a.m. Friday, March 1, at the SFA Arboretum gazebo, located at 2031 Wilson Drive.

The tree, a chalk maple, was submitted to the Texas A&M Forest Service for consideration by Greg Grant, Smith County extension agent and former horticulturalist for SFA Gardens. The agency manages the statewide Texas Big Tree Registry and is responsible for confirming trees worthy of inclusion.

“Being home to a state-champion tree is a unique honor, yet it seems fitting for a university with trees in its DNA,” said Dr. Steve Westbrook, interim university president. “I think all Lumberjacks would agree that SFA wouldn’t be the same in any setting other than our beautiful, wooded campus.”

The Texas Big Tree Registry recognizes the largest known tree of each species growing in the state. Currently, there are 274 state champion trees — 75 of which hold the title of national champion for their species.

According to the Lady Bird Johnson Wildflower Center Plant Database, chalk maples, although rare, are native to Texas and are a southern variation of the sugar maple.

“The tree itself is not very big, but for the species, it’s impressive,” said John Boyette, district forester with the Texas A&M Forest Service.

SFA’s champion chalk maple measures 28 feet tall with a circumference of 34 inches and a crown spread of 30 feet.

For more information regarding this event, contact Sarah Fuller, outreach coordinator for SFA’s Arthur Temple College of Forestry and Agriculture, at (936) 468-1185 or fullersa@sfasu.edu.