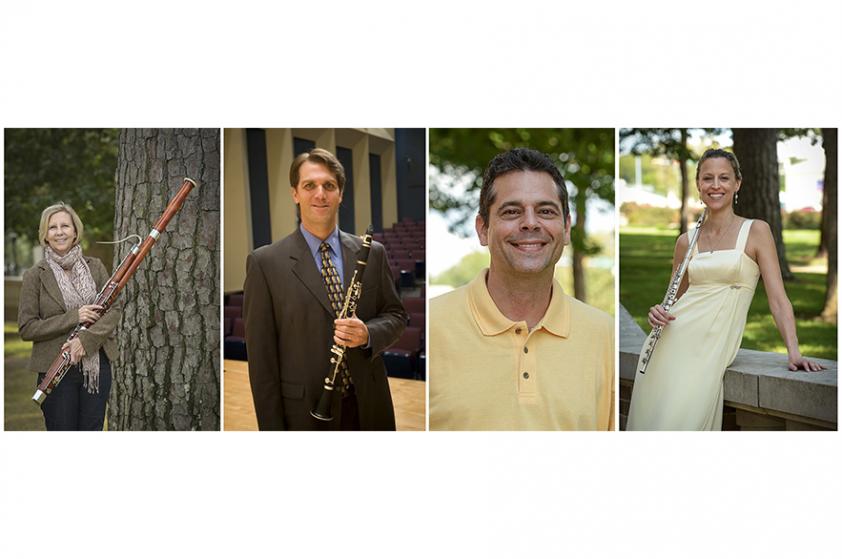 
NACOGDOCHES, Texas – The Stephen F. Austin State University School of Music and its Friends of Music Concert Series will present a rescheduling of the faculty chamber recital “Zodiacal Light” at 7:30 p.m. Tuesday, April 2, in Cole Concert Hall on the SFA campus.

Villa-Lobos was considered one of the most prominent Brazilian composers of the 20th century, according to Guenther. He synthesized Brazilian folk idioms with Western art music techniques to create a unique nationalist style. He composed his set of nine Bachianas Brasileiras (Brazilian Bach pieces) between 1930 and 1945 upon his return from Europe. These neoclassical compositions sought to link Brazilian popular music to Baroque harmonic and contrapuntal procedures, according to program notes by Amanda Cook.

Zare is an American composer and pianist. His “Zodiacal Light” was commissioned by the Flute and Clarinet Duo Consortium in 2018. Each movement is based on rare and awe-inspiring events that light up the night sky. The Aurora Borealis, or Northern Lights, is the inspiration for the first movement. The second movement, False Dawn, is a reference to the composition's title. The Zodiacal Light is a luminous cone that appears along the ecliptic, or the line along which the sun moves throughout the year.

“Frequently during the movement, the flute, clarinet and later the piano sound create an aural representation of the meteors with quick rising gestures,” Zare writes of the piece. “The music alternates between a rapid fluid moto perpetuo and a more stilted but still energetic imitative texture. Towards the end, the flowing theme from the first movement returns. It is paired with the stilted texture at first, and finally stated in a grandiose manner. One final upward rush of meteors brings the work to a close.”

Hovatter’s works span orchestral, choral, chamber and electronic genres. Like much of Hovatter’s music, “Mutation from ‘The Cascades,’” (written in 2016) is rhythmically driven, according to Guenther.

“Almost incessant murmurings and surprising accents with constant interplay between the three instruments throughout the majority of the trio give way to a slower section with lush piano chords, culminating in a playful, very rag-like ending,” she said. “The keen listener will hear that this piece is based off of ‘The Cascades,’ a rag by Scott Joplin.”

Dorff’s “Three Romances” was composed "by accident" in several stages, he said. Throughout the summer of 2006, Dorff was mainly focused on writing a lengthy piano concerto.

“One day in July 2006, a frisky-sounding duet for flute and clarinet just popped out,” he writes. “It was a complete movement, but too short to be a stand-alone composition, so I decided to write a few more companion movements.”