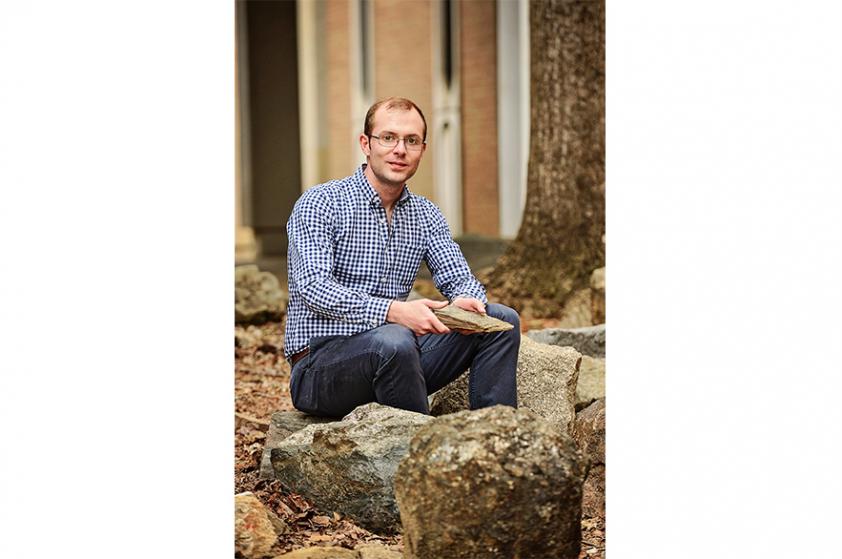 Wesley Turner, lecturer in Stephen F. Austin State University’s Department of Geology, is using an augmented reality sandbox to teach his students about topography. In recognition of his innovation, he was awarded a Bright Spot award by the SFA Faculty Senate, the Center for Teaching and Learning and the SFA vice presidents.


NACOGDOCHES, TEXAS — Wesley Turner, lecturer in Stephen F. Austin State University’s Department of Geology, is teaching his students to play in the sand.

With the help of an augmented reality sandbox, Turner brings geological concepts to life. The simplicity of the field and the way it helped explain the world around him was what originally attracted Turner to geology and gave him the desire to teach it to others.

“It involved stuff I already knew because it’s about the world we live in, but I’d never really thought about it before,” he said. “Questions I had about the Earth, the planets and space — they were all kind of answered by geology. I hadn’t previously realized that geology was so all-encompassing.”

After receiving his bachelor’s degree from SFA, Turner began teaching in the department in 2015 while obtaining his master’s degree. He currently teaches introductory geology courses, as well as online classes, and serves as the lab coordinator.

“I get to teach something that I love and I’m excited about, which I don’t think everybody gets to do,” Turner said. “It’s nice to see when people start to understand things about their world that they had an idea about already.”

The AR sandbox is one way Turner makes learning about geology a hands-on experience for his students. He and another faculty member built the box and hooked a 3D camera up to an Xbox Kinect and a projector. By manipulating the sand, students can change the way contours representing the topography are projected onto it.

“Being able to visualize it and make your own surface and see how the contours will reflect that surface helps students get the concepts a little better,” Turner said.

In recognition of his work, he was awarded a Bright Spot award by the SFA Faculty Senate, the Center for Teaching and Learning and the SFA vice presidents.

For more information about SFA’s Department of Geology, visit sfasu.edu/academics/colleges/sciences-math/geology.