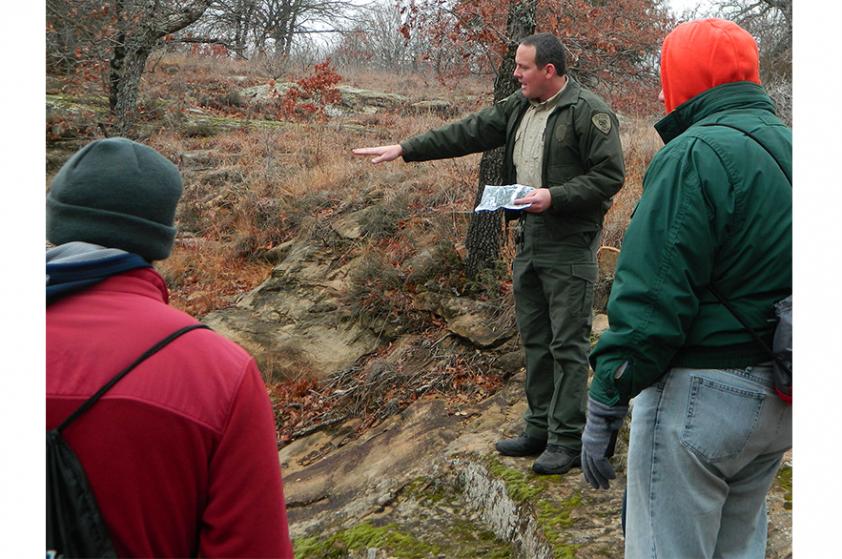 
NACOGDOCHES, Texas — The Oklahoma State Park system encompasses diverse landscapes ranging from subterranean caverns to rolling mountains. However, of the more than 55,000 acres that comprise the state park system, some of the most spectacular, scenic vistas are not accessible to those with health or mobility limitations.

Thoreson, pursuing a Master of Science in resource communications at SFA, serves as a park ranger at Osage Hills State Park, located within the Osage Nation Reservation in northeastern Oklahoma.

When contemplating topics for his final nonthesis project, Thoreson said he researched the growing popularity of 360 videos and how this technology can be utilized to share Oklahoma’s state parks with everyone.

“For example, to get to the best vantage point of the falls at Natural Falls State Park, you have to go down to the very bottom so you’re looking up at the falls,” Thoreson said. “We have sort of a skyway that goes out and gives you a view from part of the way down, but it’s just not the same as being below the falls.”

By capturing 360 video and audio from this position, Thoreson said people unable to make the hike down will still have the opportunity to fully immerse themselves in the experience of the 77-foot waterfall.

Thoreson presented his idea to regional managers within the Oklahoma State Park system, and he is currently collecting 360 video at select parks.

“We have to determine what things different demographics want to see and ensure it is speaking to their emotional health.”

This focus on improving mental health through virtual immersion in nature is of great significance, especially considering the growing body of research indicating that time in or exposure to nature can improve emotional health and well-being.

While 360 video is available on platforms such as YouTube and other social media sites, Thoreson hopes to expand this initiative by using more immersive virtual reality suites that are equipped with multiple viewers, phones and a server to allow large numbers of people to experience the footage together.

Thoreson said tools like this allow parks to expand their reach and impact by taking the footage directly to those physically unable to visit the park due to health, economic or transportation limitations.

“They can put on a viewer in the comfort of home to experience the park,” Thoreson said. “It’s a driving interest of mine — to be sure I can take the parks to the people.”

To learn more about this and other research, visit atcofa.sfasu.edu.