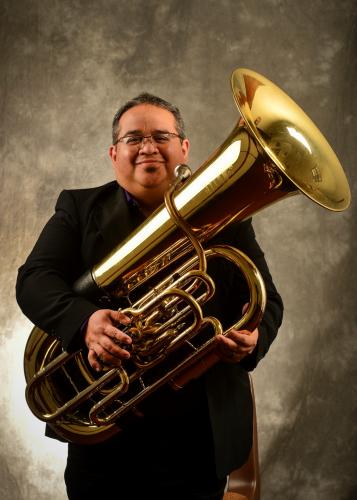 Octubafest is a worldwide event celebrated by tuba and euphonium performers at universities around the world during the month of October, according to Salas. The observance is meant to showcase the versatility of the tuba and euphonium, instruments that primarily play a background part in many ensembles.

“This will be the 14th Octubafest at SFA since my arrival here and will feature several performances by the SFA Tuba-Euphonium Studio throughout the month,” Salas said.

Salas will collaborate with Dr. Thomas Nixon, SFA collaborative pianist, on the recital. Among the works to be showcased are “Libertango” by Astor Piazzolla.

“This well-known work by the master of the tango has been performed by several instruments,” Salas said, “but it works well to showcase the technical capability of the tuba as well as its beautiful voice-like quality in the upper register.”

The recital will also feature “Ten Blind Dates for Solo Tuba” by James Grant. The piece is the result of a consortium commissioning project involving Salas. “It is a ‘character piece’ illustrating the various emotions and experiences of a blind date,” he explained.

“Landscape for Tuba” by Torbjorn Lundquist is large-scale work originally written for tuba and strings. “This version for tuba and piano runs the gamut of the tuba’s depth of character with beautiful lyrical sections contrasted with powerful interjections,” according to Salas.

The recital is part of the School of Music’s Friends of Music Concert Series. Tickets are $8 for adults, $6 for seniors and $3 for students and youth. For tickets or more information, call the SFA Fine Arts Box Office at (936) 468-6407 or visit www.finearts.sfasu.edu.