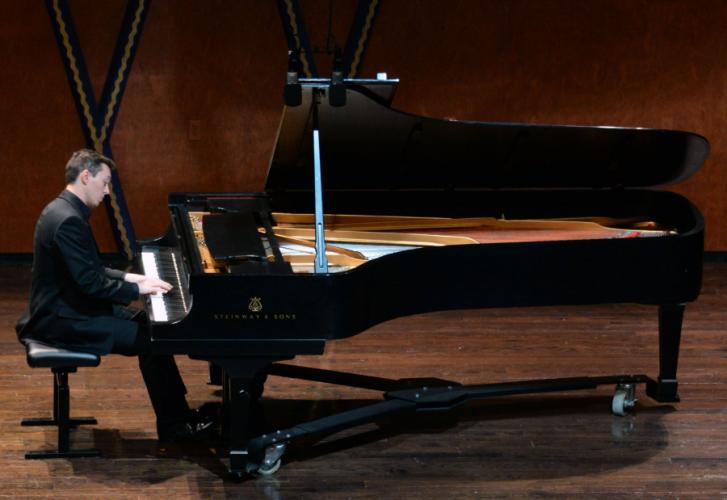 A performance by Dr. Thomas Nixon, staff accompanist in the SFA School of Music, opens this year’s Friends of Music Concert Series. The recital is at 7:30 p.m. Thursday, Sept. 5, in Cole Concert Hall on the SFA campus.

The Friends of Music Concert Series features more than 20 faculty and guest artist performances in all music areas – woodwind, brass, percussion, vocal strings, piano and composition. Some of Nixon’s favorite works have been chosen for this performance.

“Since I spend most of my time as a collaborative pianist, I wanted to show a different side of me and give a solo piano recital,” he said. “Although the program is fairly traditional, I wanted to showcase some of my favorite works and composers.”

Among his program selections is Barcarolle, Op. 60 by Frederic Chopin. Nixon describes the piece as a masterpiece from the composer's later years. “The piece evokes the imagery of Italy, in particular the songs of gondoliers while traveling through the canals of Venice,” he said.

Also featured is Sonata No. 5, Op. 53 by Alexander Scriabin. “This single movement sonata is glorious, enigmatic and extremely virtuosic. Scriabin pushes the boundaries of atonality, and the piece alternates between moments of delirium and obsession,” Nixon said.

“La valse” by Maurice Ravel was originally conceived as a two-piano work, later orchestrated, and then finally arranged for solo piano by the composer himself. “The work depicts the birth, life and death of the Viennese waltz as a representation of the destruction of the Austro-Hungarian Empire at the end of WWI,” Nixon said.

The Friends of Music Concert Series is made possible by the Wedgeworth-Wright Endowment for the Arts, the James E. and Beth Kingham Performance Fund and the Kennedy Recital Fund. Cole Concert Hall is located in the Tom and Peggy Wright Music Building, 2210 Alumni Drive.