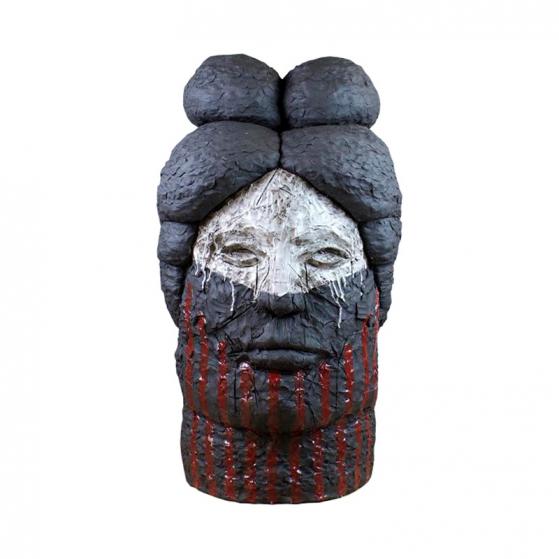 Caddo Nation artisan Raven Halfmoon’s piece “Do You Speak Indian?” is among the artwork featured in “Caddo Contemporary: Present and Relevant” showing Jan. 24 through March 24 in The Cole Art Center.


NACOGDOCHES, Texas – The exhibition “Caddo Contemporary: Present and Relevant” will show Jan. 24 through March 24 in The Cole Art Center @ The Old Opera House in downtown Nacogdoches.

Featuring ceramics, paintings, beadwork, stonework and drawings, the exhibition is a collaborative presentation of the Stephen F. Austin State University School of Art and Art Galleries and the Caddo Mound Historic Site in Alto, according to John Handley, director of art galleries.

The exhibition highlights the work of seven Caddo Nation artisans, including Wayne Earles, Chad Earles, Chase Earles, Raven Halfmoon, Yonavea Hawkins, Jeri Redcorn and Thompson Williams. An opening reception with the artists in attendance is from 6 to 8 p.m. Thursday, Jan. 24.

Handley said he considers this exhibition to be an important one for two reasons.

“It is the first exhibition that highlights the work of living Caddo artists,” he said. “And, the exhibition is a first for Caddo art displayed in Nacogdoches, the home of the Caddo Nation for thousands of years before they were forced off their land in the early 1800s and relocated to Oklahoma.”

The exhibition will also include programming at both The Cole Art Center and the Caddo Mounds Historic Site, including a film, demonstrations and performances of dance, music, storytelling and poetry reading. A full-color exhibition catalogue has been prepared.

“Up until now, scholarship on the Caddo Nation has focused on its remarkable, albeit painful, past,” Handley said. “Caddo history, art, language and dance have been explored in books and journal articles. Although this work can be applauded, there has been little to no forward-looking work published. This exhibition is a step towards remedying such oversight by seeing first-hand the present day and relevant work in ceramics, paintings, beadwork, stonework and drawings.”

Several of the exhibition’s artists have gained national attention, Handley added, most notably Jeri Redcorn, who has spent decades working with scholars to rediscover traditional Caddo ceramic methods. Her work has been displayed at the White House during the Obama administration and is in the collection of the Smithsonian Institution. Chase Earles was mentored by Redcorn so as to pass on to future generations this unique type of pottery making, Handley said.

Special programming will accompany the exhibition, including storytelling by Kricket Rhoades-Connywerdy, an enrolled member of the Caddo and Kiowa tribes of Oklahoma who has been telling Kiowa and Caddo stories in Oklahoma, across the United States and internationally for more than two decades. A storytelling session is at 2 p.m. Sunday, Feb. 17, at Cole Art Center.

Dancing in her traditional Caddo dress and Kiowa buckskin, Rhoades-Connywerdy toured extensively with the legendary Charles Chibitty, the last Comanche code talker, and was Gulhei descendent princess (family princess) for 1999-2000. She has won awards for her lead movie roles, which included “The Legend of Billy Fail,” “The Alamo,” “Chasing the Wind,” “Last of the Mohicans” and “UHF.” She has an associate’s degree from Tulsa Community College and graduated from the University of Oklahoma with a bachelor’s degree in Native American studies. She is the former executive director of the Historic Jacobson House Native Art Center and currently works with the Kiowa Tribe of Oklahoma’s Kiowa Language and Culture Revitalization Program.

Additionally, the PBS film “Koo-Hoot Kiwat: The Caddo Grass House” will be screened at 7 p.m. Friday, March 1, at Cole Art Center as part of the School of Art and Friends of the Visual Arts’ Friday Film Series.

The exhibition is sponsored in part by William Arscott, The Flower Shop, Nacogdoches Junior Forum, Humanities Texas and Friends of the Visual Arts. Admission is free.