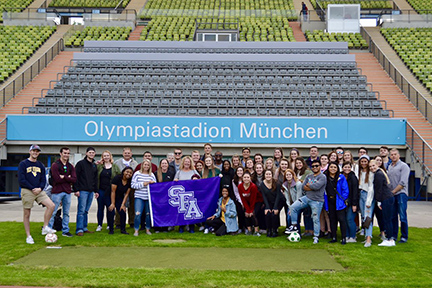 During a study-abroad experience, 44 Stephen F. Austin State University students in the Rusche College of Business witnessed international business and marketing in Germany, Austria and Italy. At each location, the group visited with business leaders. One stop was the Munich Olympic State Park, which was the site of the 1972 Olympics.


NACOGDOCHES, Texas — They say the world is a classroom, and for 44 Stephen F. Austin State University students in the Rusche College of Business destinations in Germany, Austria and Italy recently replaced their regular class schedules.

Trading the pineywoods for the sights and sounds of Munich, Germany; Innsbruck, Austria; and Verona and Rome, Italy; students enrolled in a marketing course focused on industry, education and sports experienced business internationally.

Dr. Matthew Lindsey, chair of the Department of Management and Marketing, said this trip helped students witness firsthand the concepts they are learning in the classroom. Before leaving for Europe, students studied management issues across cultures.

“It became clear the business culture in Germany was not the same as in Italy,” Lindsey said. “The views on relationships, communication styles, time orientation and other aspects of business life greatly differ.”

During the study-abroad experience, students visited with business leaders on a global scale. In Munich, visits included the BMW Welt, the Munich Olympic State Park (site of the 1972 Olympics), the Spaten-Löwenbräu Brewery and the Allianz Arena football stadium.

“The visits provided vivid examples of many business concepts discussed in the classroom,” Lindsey said. “We were able to learn about the product decisions at each company, the impact of pricing on the company and gain insight regarding why company leaders chose their locations.”

In Austria, the group attended an Alpine tourism lecture at the Management Center in Innsbruck, the Berchtesgaden salt mine and the Swarovski headquarters. Italy brought students to the Zeni vineyards, Cinecitta Studios and a presentation by Rome Field and Research International. The students also toured the Roman Colosseum and other tourist sites.

“Visiting the Roman Colosseum, the Olympic Stadium and the Allianz Arena provided an interesting contrast involving how large venues have changed through the years and how they have stayed the same. They have more in common than anyone suspected,” Lindsey said. “The way athletes entered the playing field was surprisingly similar between Allianz and the Colosseum. Both used doors that opened and allowed the players to enter from below.”

Along with Lindsey, Dr. Charlotte Allen, professor; Dr. Jason Reese, assistant professor and coordinator of the sports business program; and Dr. Mikhail Kouliavtsev, professor and chair of the Department of Economics and Finance, led the trip.

“Hopefully this opened the students’ eyes to new cultures and different ways of operating businesses,” Allen said. “Many of the businesses we visited are family run and have been in the family for generations.”