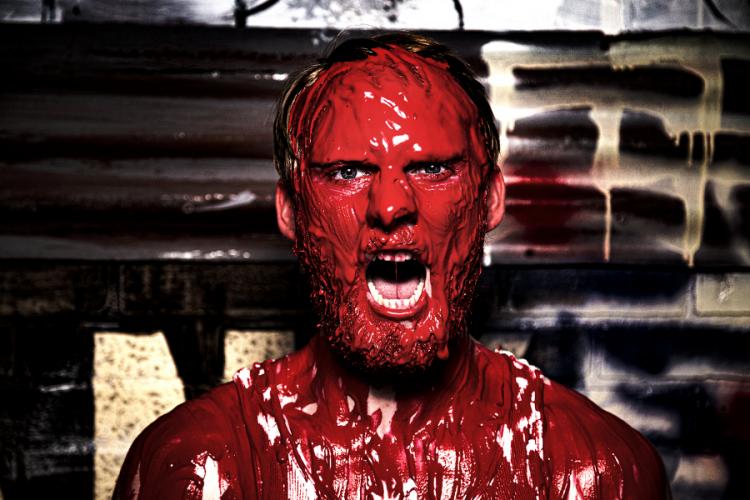 Freshman theatre student Triston Dodson of Hawkins portrays the lead character in William Shakespeare’s “Titus Andronicus” to be presented by the SFA School of Theatre at 7:30 p.m. Tuesday through Saturday, Nov. 12 through 16, in W.M. Turner Auditorium on the SFA campus.


NACOGDOCHES, Texas –  When the School of Theatre faculty at Stephen F. Austin State University chose William Shakespeare’s male character-dominated play “Titus Andronicus” for this year’s Mainstage Series, it was in response to the all-female show, “The Wolves,” that had filled the first Mainstage run for the fall semester.

Although “Titus Andronicus” has been described as one of Shakespeare’s bloodiest plays, Cleo House Jr., director of the School of Theatre and this play’s director, sees it as one of The Bard’s “most fun plays,” he said, adding that he believes it “encapsulates all the things we love about the theatre.”

“Great imagination, high camp, lots of drama, extreme simulated violence and lots of twists and turns,” House listed as the play’s theatrical qualities. “It’s the kind of play that harkens back to playing cops and robbers in your back yard.”

“Titus Andronicus” chronicles Rome’s honored general as he returns home from war and begins a cycle of revenge filled with bloody deaths as punishment for a series of committed wrongs. The show runs Nov. 12 through 16 in W.M. Turner Auditorium.

The play’s action on stage includes intricate fight choreography, film-like special effects, beheadings and missing limbs. But according to House, if you’re 13 or older, “this show is for you.”

“We have worked hard to make this play relatable and understandable,” he said. “Our version of ‘Titus’ is an adaptation that is set in a post-apocalyptic future. If you’re familiar with the movie ‘Mad Max,’ that gives you an idea of the tone of our play.”

Keeping the audience engaged in this play is challenging because of its complicated language, the fast pace of the storytelling and the multiple scene changes, according to House.

“Pace is a challenge because there is so much information that we are trying to convey to the audience, but we also need to keep the pace of the production moving along to keep the audience engaged,” House explained. “When working on a show like this, you want to let the words do the work, but we also must create points of reference that the audience can grasp so that they remain engaged as the story is unfolding.

“Then, just on a practical level, there are so many shifts in location,” he added. “How do we get from one place to the next as smoothly and simply as possible? How do we do it in such a way that pace, engagement and storytelling are not adversely affected?”

At issue for the students actors, as with most of Shakespeare’s plays, is the language.

“Shakespeare’s language is foreign to most young actors, and he made up words,” House said. “Learning those words and how to communicate those ideas to a modern audience can be difficult.”

The play is also filled with stage combat. Actors are spending countless rehearsal hours learning complex fight choreography that is being taught to them by Dr. Slade Billew, assistant professor of acting in the School of Theatre who specializes in fight choreography.

As the result of all the elaborate details that will be included in this presentation of “Titus Andronicus,” House believes the audience experience will be greatly enhanced. After seeing this play, theatre patrons will have “a greater appreciation for the work that goes into creating theatre,” he believes.

“Hopefully, they’ll be a fan of Shakespeare and an even bigger fan of the School of Theatre,” he said.