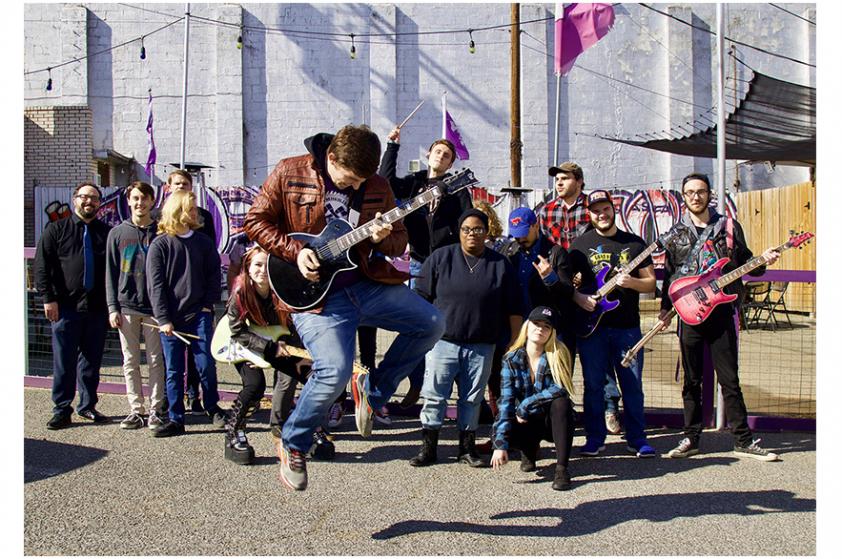 SFA’s Rockin’ Axes will perform at 7:30 p.m. Wednesday, May 1, in Cole Concert Hall on the SFA campus. The concert will feature the music of Muse, Queen, Nirvana and others.


NACOGDOCHES, Texas – The Rockin’ Axes at Stephen F. Austin State University will present a concert featuring popular songs from different time periods when the student ensemble performs at 7:30 p.m. Wednesday, May 1, in Cole Concert Hall on the SFA campus.

A student group within the School of Music’s Sound Recording Technology program, the Rockin’ Axes is directed by Nick Lambson, SRT faculty member.

“Students suggested and voted on these songs, including my selections, so there is no real theme,” Lambson explained. “Instead, we made sure to cover a number of sub-genres and songs from different time periods.”

Lambson said he also chose songs and assigned parts that would challenge specific students or that would allow them to develop their strengths. Among the selections are “Supermassive Blackhole” by Muse, “Bohemian Rhapsody” by Queen, “Smells Like Teen Spirit” by Nirvana and “Black Dog” by Led Zeppelin.

“We chose one song by Muse that uses a custom guitar with a built-in electronic music controller, which one of the students recently purchased,” he said. “We also chose ‘Bohemian Rhapsody’ because of the recent biopic, but also because it’s a classic.”

A student composition, “Through the Dark,” co-written by SRT major Chance Hill and student Vic Odom, will be featured. “They have worked hard and gone above and beyond by doing a recording of it, and we’re excited for the world premiere,” Lambson said.

Lambson also promised a surprise. “Without giving anything away, there will be a special encore …,” he said.

The concert is a presentation of the College of Fine Arts and School of Music. Tickets are $8 for adults, $6 for seniors and $3 for students and youth. For tickets or more information, call the SFA Fine Arts Box Office at (936) 468-6407 or visit www.finearts.sfasu.edu. Follow the ensemble on Facebook at The Rockin’ Axes of SFA State University.