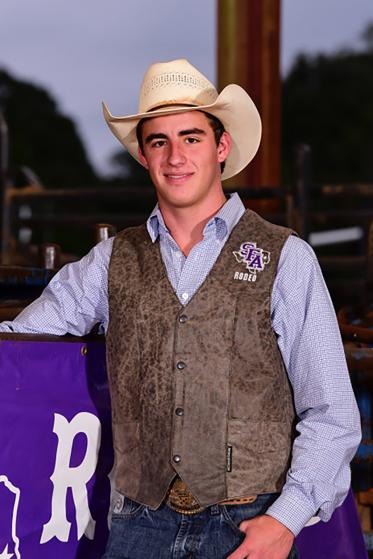 Sarah Fuller, outreach coordinator for the Arthur Temple College of Forestry and Agriculture
•
May 29, 2019

Stephen F. Austin State University student Kasen McCall will compete alongside more than 400 students from across the United States, as well as Canada, Brazil and Australia for individual event championship titles at the 2019 College National Finals Rodeo June 9 through 15, in Casper, Wyoming. McCall, a freshman agribusiness major and Lufkin native, will compete in the team roping event. Photo credit: James Phifer

McCall, a Lufkin native, has been involved in rodeo since the age of 9 and is currently a member of the SFA Rodeo Team. He and his roping partner, Clayton Lowry of Panola College, will compete alongside more than 400 students from across the United States, as well as Canada, Brazil and Australia for individual event championship titles that include cash prizes, scholarships and championship hardware comprising buckles, rings and plaques.

“I am ecstatic for him and extremely happy for our university,” said Rachel Clark, SFA coordinator of student publications and SFA Rodeo Club advisor and team coach. “This is a monumental moment where we’re able to showcase our university on yet another national stage.”

To qualify for the College National Finals Rodeo, McCall and Lowry competed in 10 rodeos across Texas and Louisiana, earning enough points in the National Intercollegiate Rodeo Association’s Southern Region to receive a national bid.

McCall said he and his partner practice as much as they can utilizing arenas owned by family members and friends, as well as the arena located at SFA’s Walter C. Todd Agricultural Research Center.

During the team roping event, a steer is released from a chute into the arena. After the steer reaches a certain point in the arena, the two team members pursue the animal on horseback from their respective chutes. One team member, known as the header, ropes the steer’s horns or neck while turning the animal to the left, enabling the heeler to rope the steer’s back feet.

The ropers’ horses are equally important members of the team, responding to their rider’s cues to tighten the ropes and secure the steer on the ground in the fastest time possible.

“The horses learn you, you learn them, and then you just combine to get the job done,” McCall said.

Although McCall will be performing an arguably difficult undertaking on a national stage against older, more experienced competitors, he keeps a calm demeanor as he considers the task at hand.

“I usually don’t get nervous,” McCall said with a smile. “I’m excited to go.”

Clark said the SFA Rodeo Club was established in the 1960s, and since that time only two other team members have qualified for the College National Finals.

The rodeo finals will be available for streaming on ESPN 3 beginning Wednesday, June 12, while future broadcasts will air on ESPN U.

While the Rodeo Club is open to all students, those who are a part of the SFA Rodeo Team typically have a strong foundation in agriculture and are required to provide their own horses and gear to compete. For more information, contact Clark at clarkr1@sfasu.edu or (936) 468-4703.