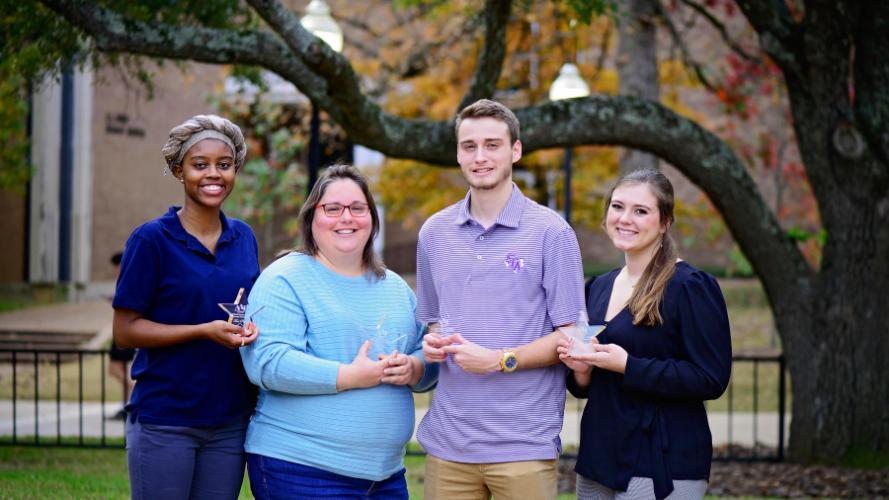 
NACOGDOCHES, Texas — Students from Stephen F. Austin State University’s Department of Mass Communication, School of Art, and Department of Management and Marketing recently took part in a competition for the American Advertising Federation in Houston.

The client for the competition was 76, a gas station chain with locations across the U.S. Teams were tasked with creating a complete advertising campaign for the client within two days, which they then presented to a panel of three judges. Winners received a crystal trophy and were encouraged to apply for AAF-Houston Education Foundation scholarships, with the added opportunity to continue on to compete in the National Student Advertising Competition in spring 2020.

SFA was well represented in the competition, as the top three teams all contained SFA students, and the winning group included five students from SFA, including Nia Brooks, mass communication junior from Atlanta, Georgia; Misty Boggs and Connor Payne, mass communication seniors from Diboll and Frisco, respectively; Sarah Bone, art junior from Richmond; and Kennedy Jones, marketing major from Houston all received awards during the competition.

In addition to presenting their campaigns to the judges and hearing feedback on their work, the students also were given the opportunity to learn more about the upcoming NSAC competition and hear from a panel of young, successful professionals involved with the AAF in Houston.