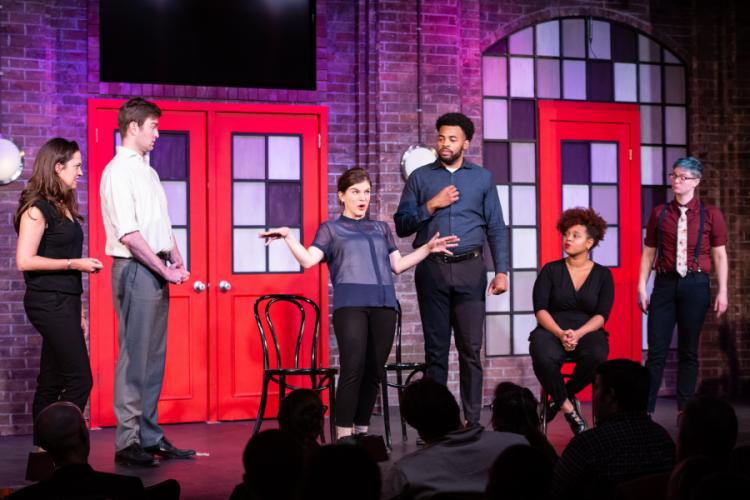 Comedy-improvisation ensemble The Second City will open the 2019-20 University Series at SFA with a performance at 7:30 p.m. Friday, Sept. 6, in  W.M. Turner Auditorium on the university campus.

The College of Fine Arts at Stephen F. Austin State University will open its 2019-20 University Series with a performance by The Second City at 7:30 p.m. Friday, Sept. 6, in W.M. Turner Auditorium on the SFA campus.

Since opening in Chicago in 1959, this small cabaret theatre as grown to become the most influential and prolific comedy empire in the world, developing an entirely unique way of creating art and fostering a generation of superstars. Local fans will now have the opportunity to enjoy their improvisational approach to comedy in a live performance on Turner stage featuring comedy’s newest, up-and-coming celebrities, according to Scott Shattuck, associate dean of the College of Fine Arts and director of the University Series.

“The Second City is truly the epicenter of the comedy world,” Shattuck said, “having given us most of the casts of ‘Saturday Night Live,’ ‘SCTV,’ ‘The Daily Show’ and more. It has been too long since their national tour visited the SFA campus in Nacogdoches.”

Today, The Second City is a world-class entertainment company, continuing to produce premier talent in all three of its locations – Chicago, Toronto and Hollywood – and entertaining more than one million audience members a year. In addition to its own stages, Second City Touring Companies perform electrifying revues and original productions across North America and abroad.

“A recent showcase of their touring cast’s performance had us rolling in the aisles,” Shattuck recalled. “Only a small part of their act is political satire, and they poked fun at all sides with equal glee. Their ability to turn every aspect of modern life into hilarity is truly delightful.”

This performance is recommended for mature audiences.

Prior to the SFA performance, Jackie Rosenfeld, lecturer in the SFA School of Theatre, will present an informative talk at 7 p.m. in Griffith Gallery. The gallery is located across the hall from Turner Auditorium, which is inside the Griffith Fine Arts Building, 2222 Alumni Drive. The audience is invited back to the gallery for a post-performance reception to meet the performers.

Single event ticket prices for the University Series are $30 for adults, $24 for seniors, $15 for SFA faculty and staff and $12 for non-SFA students/youth. Tickets for SFA students are $3.  Season tickets are still available and offer consistent seating throughout the season as well as additional discounts.