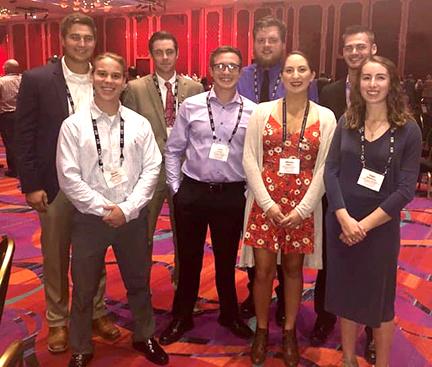 “Our team did well, but came up just short of Purdue University, the eventual national champions, in the third round,” said Jake Hill, forest wildlife management sophomore and vice president of SFA’s student chapter of The Wildlife Society. “The opportunity to compete at the national level against 18 other major schools from across the U.S. was truly a privilege.”

The SFA chapter also was recognized for its efforts in advocating for the adoption of the Recovering America's Wildlife Act. This bipartisan legislation seeks to make supplemental funds available for the management of fish and wildlife species in greatest need of conservation as determined by individual state fish and wildlife agencies. Last year, the SFA chapter mailed more than 600 letters expressing their support for the initiative to representatives and lawmakers across the state.

“This conference was all about personal and professional development, and I think the chapter definitely achieved its goals,” said Dr. Daniel Scognamillo, SFA associate professor of forest wildlife management and faculty advisor for the student chapter.

Students participated in a variety of networking events and special sessions related to current issues in wildlife science and management. Scognamillo also facilitated a conference workshop and delivered two presentations regarding wildlife research conducted at SFA.

This was the first-ever joint national conference of these two conservation organizations, drawing approximately 5,000 fish and wildlife professionals from across the U.S., Mexico, Canada and beyond.