SFA’s Guenther, Petti to perform ‘An Air of Mystery’ program 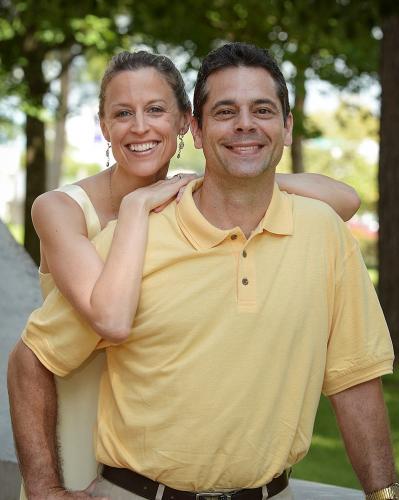 SFA School of Music faculty members Drs. Christina Guenther and Ron Petti will present the flute-piano program “An Air of Mystery” at 7:30 p.m. Tuesday, Sept. 24, in Cole Concert Hall on the university campus.

The recital is part of the Friends of Music Concert Series and will feature works by Aaron Jay Kernis, David Maslanka, Jake Heggie and Samuel Zyman.

“Air” by Kernis is songlike and melodic, and it is “the purest and sparest piece I’ve written in a few years,” the composer writes. It contains many hymn or chant-like elements, and though rooted in E-flat major, it “retains a kind of plaintive quality more reminiscent of minor or modal tonalities,” he added.

Guenther met composer Maslanka in March 2004 when she was performing at a Society of Composers Inc. conference at which he was a featured composer.

“We spoke briefly the day before I performed, but it was after my performance of a very challenging new work that he came up to me and said, ‘You’ve got the stuff!’” Guenther writes in her program notes. “What encouraging words for a young performer from one of the compositional legends of our time. Maslanka was a quiet, introspective man – tall, thin, unassuming, humble. We kept in touch and, in May 2004, he sent me his ‘Duo’ as a gift.

“At the time, I was playing a lot of new music, and even though this piece was written three years before I was born, I felt like it was written for me,” Guenther said. “It was just my style – challenging, intense, passionate and insistent, and with some of my favorite extended techniques. Regrettably, I did not get to perform it during Maslanka’s lifetime; I had to find a pianist whose arm I could twist to learn it, and my husband is the lucky soul who (probably reluctantly) agreed.”

Heggie’s “Soliloquy” for flute and piano is a setting by the composer of his song “Beyond” from “Pieces of 9/11: Memories from Houston,” which was written based on interviews with Houstonians and their stories regarding the Sept. 11, 2001, attacks.

“Those of us who lived through the Sept. 11, 2001, terrorist attacks remember exactly where we were when we got the news,” Guenther writes. “I was in graduate school at Florida State University in Tallahassee taking care of flute studio-related business before attending Denise von Glahn’s 20th Century music history class. When the towers – and all the antennae on top of them – went down, so did communication to much of the northeast. I grew up 20 minutes outside New York City in a town from which many people commuted to NYC for work; my family still lived there. My mother later told me that she saw children – my siblings’ classmates – walking home from school that day with their parents – high school boys holding their fathers’ hands. Not all the kids in our town were so lucky – some lost a parent. We were fortunate – that was not one of the occasional days when my dad had a work meeting in Manhattan. Eventually, trying not to panic from so far away in Florida where we were helpless and, like the rest of the country, still didn’t really know what was going on, I was able to reach my dad on his cell phone.”

Zyman, a New York-based Juilliard faculty member, is one of the leading Mexican composers on the international scene. His Sonata for Flute and Piano is regarded as a major repertoire piece and is frequently performed worldwide. It was chosen to be one of the required repertoire works for the semifinal round of the Young Artist Competition for outstanding flutists at the National Flute Association Convention in New York City in August 2009.