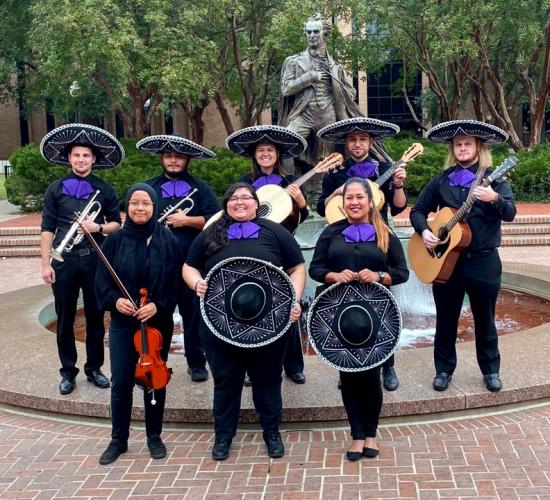 “One of the traditions in the Mexican culture is to serenade a loved one with a mariachi,” said Dr. J.D. Salas, associate professor of tuba in the SFA School of Music. “This recital will serve as a serenade to the SFA and Nacogdoches communities following the group’s fall semester of rehearsals and performances.”

The group was formed during the fall of 2018 by senior music education major Danny Chavera Jr.  Originally from Dilley, Chavera drew from his own experiences performing in high school, where almost every school in predominantly Hispanic areas had a mariachi ensemble as part of the music education experience. The SFA group consists of student musicians on trumpet, guitar and violin, accompanied by the traditional mariachi string instruments, including the vihuela and guitarron.

Los Leñadores has performed at several local and area events, such as the Nacogdoches Dia de los Muertos Fiesta, the Texas State Forest Festival in Lufkin, and the Nacogdoches Multicultural Festival.

The concert is free to attend; donations will be accepted. The group has been fundraising to purchase instruments that will remain with the SFA student ensemble as its members graduate. Most recently, enough funds were raised to purchase a guitarron. Future fundraising will aid in purchasing mariachi uniforms.