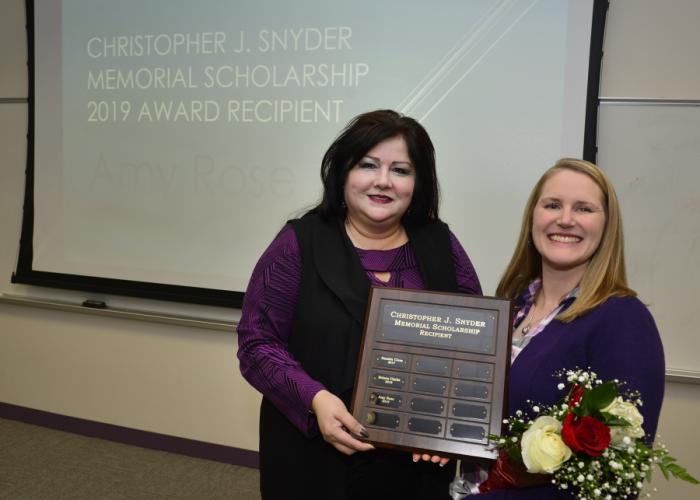 Luna, who married Snyder in 2001, said she sees the same passion for orientation and mobility in Rose that Snyder, who was a two-time graduate of the program, held. Snyder passed away from cancer in 2017. His family, students and friends established this permanently endowed scholarship in his memory. Rose is the third recipient.


NACOGDOCHES, Texas — Though they never met, Amy Rose, a senior in the orientation and mobility program at Stephen F. Austin State University, and Christopher J. Snyder, the namesake for the scholarship Rose received, found the program the same way — through an intensive internet search.

As a junior at Tarrant County Community College in Fort Worth last fall, Rose said she was still struggling to find her passion. “I didn’t even know orientation and mobility was a thing.” Then she visited the SFA Department of Human Services website. “It was a sign and a blessing from God,” she said. “The decision to transfer to SFA and all the hard work have felt right the whole time.”

Rose connects to her studies on a personal level because she’s been visually impaired since birth. “I’ve had to deal with this my entire life, so I can relate not only to the material we cover in our lecture courses, but also to the blindfold lessons we do out in the field and the work we do with our peers who are blind or visually impaired,” she said.

Rose’s leadership and stewardship impressed her classmates so much that they soon started calling her “Mama Amy.” These characteristics and her high GPA earned Rose the honor of being the third recipient of the Christopher J. Snyder Memorial Scholarship.

Established in 2017 shortly after Snyder’s death from cancer, the permanently endowed scholarship “means so much to keep Chris’ memory alive,” said Nacogdoches native Kim Luna, who married Snyder in 2001.

Upon graduating in 1999, Snyder returned to Chicago to help students with visual impairments, but he dedicated his summers to SFA. In 2000, he began teaching a six-week course at the university that helped teachers learn orientation and mobility skills to better assist their students with visual impairments. In 2004, he and Luna returned to Nacogdoches.

After earning his Master of Education in special education with an emphasis in emotional disorders and autism from SFA in 2005, Snyder began working for Nacogdoches ISD as the district’s assistive technology manager and orientation and mobility specialist. And every summer, he continued to work with SFA graduate students.

“I just wish I could’ve met him and worked with him because you don’t come across people who have the spirit he did,” Rose said, adding that she quickly heard about Snyder’s contributions to SFA’s orientation and mobility program when she arrived last spring.

Luna said she sees the same passion in Rose that she saw in Snyder.

“Chris loved what he did, and he was good at it. That passion is there in Amy, too. Teaching students with visual impairments is a special profession. Amy will make a difference in others’ lives.”