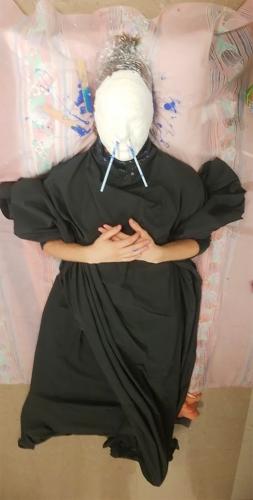 Among the special effects props created for the SFA School of Theatre’s presentation of Shakespeare’s “Titus Andronicus” are severed heads, hands and other limbs. The play will be presented at 7:30 p.m. Tuesday through Saturday, Nov. 12 through 16, in W.M. Turner Auditorium on the SFA campus.

Directed by Cleo House Jr., director of the School of Theatre, “Titus Andronicus” chronicles Rome’s honored general as he returns home from war and begins a cycle of revenge filled with bloody deaths as punishment for a series of committed wrongs. The show runs Nov. 12 through 16 in W.M. Turner Auditorium.

This adaptation of “Titus Andronicus” takes place in 2100 in Washington, D.C., in a post American-Russian (Roman-Goth) fallout. The play’s action on stage includes intricate fight choreography, film-like special effects, beheadings and missing limbs. Dr. Slade Billew, assistant professor of acting and movement in the School of Theatre who specializes in fight choreography, has incorporated a variety of fighting styles into the show.

“Since the play was updated to the near future, the fights reflect the wide range of fighting styles available in contemporary society,” Billew said. “The audience will see elements of Kung Fu, Filipino martial arts and various other styles. We intentionally chose a very broad range of weapons, so that we could showcase variety.”

“Titus Andronicus” has been described as one of Shakespeare’s most violent plays. As such, perfecting massive amounts of fight choreography can take a lot of time. “We began choreographing towards the beginning of this semester and have continued to layer in new elements and details throughout the process,” Billew said.

Safety is always a key concern when choreographing fight scenes, according to Billew. Repetition, clarity and control of distance are key to maintaining actor safety. One of the big challenges of this piece has been that many of the fights happen in small spaces, he added.

“This show contains some large group battle scenes that involve a lot of intense activity, and the level of physical demand varies,” he said. “Actors need to maintain a base level of physical fitness, and then receive training through our program to help them move with more efficiency and control.”

Kingwood sophomore Jenna Alley is properties master for the show. She and fellow students have been busy creating the multitude of props needed for “Titus Andronicus,” including severed heads and hands.

“This is one of the biggest shows I’ve ever been a part of, and it’s definitely the biggest and most demanding show I’ve been in here at SFA, so one of the biggest challenges is the sheer quantity of props needed for this production,” she said. “The process of creating props is amazing, from coming up with some kind of concept or sketch and then figuring out how to make it work and then finally being able to see and hold it in your hands.”

The students have learned such techniques as how to create molds of and cast hands and faces and how to make human entrails – projects that seemed “really daunting at first,” Alley said.

“We’ve learned that sometimes there’s a lot of trial and error before you get something absolutely perfect,” she said, “but it’s worth it once you end up with something you’re really proud of.

“I think we are all super excited to see the whole thing come together and also to have other people finally see it,” she said. “Everyone in this production, and all the students whose names aren’t in the playbill but came in to help, worked so incredibly hard, and I think it absolutely paid off.”

Billew said he is looking forward to seeing how the audience reacts to the show, which opens with a mass battle on stage.

“Figuring out something that is dynamic, but clear enough for audiences to follow while so much action is happening on stage, has been fun,” he said.