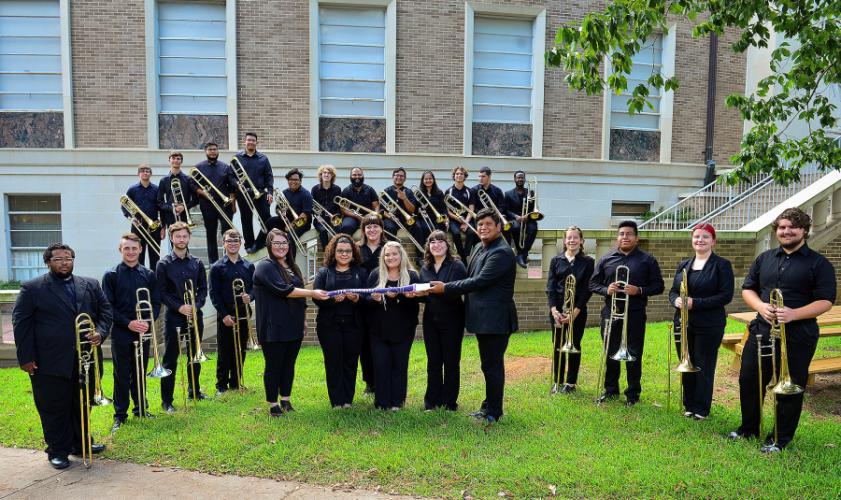 SFA’s Trombone Choir will perform new compositions for trombone ensemble in a concert at 7:30 p.m. Tuesday, Nov. 5, in Cole Concert Hall on the SFA campus.

The choir’s director, Dr. Deb Scott, professor of trombone in the SFA School of Music, is also the director of the Composers Workshop for the ITF, putting her in the unique position to hear and help select new works for the trombone choir.“There were eight new works for trombone ensemble, and we will be presenting two of them,” she said.

The choir will perform Alex Buehler’s “Z/28,” which represents sounds and harmonics that occur within an actual 1969 Z/28 Camaro engine. The piece is composed for a 16-part trombone choir. Buehler is currently pursuing a master’s degree in composition at the University of North Texas.

“The Dastardly Master Asteroid Blaster” by Adam Summey was also selected to be performed at the 2019 ITF. Summey is a trombonist studying at Appalachian State University.

"Both pieces use the unique timbre of the trombone to create a lot of energy that is really fun to listen to,” Scott said. “I’m excited to bring these compositions back home.”

Along with the trombone choir, members of the SFA Trombone Quartet will perform a new composition, “Flurry,” by SFA graduate composition student Scott Hansen. Quartet members include Kahlil Wyatt of Duncanville; Sterling Davis of Columbus, Ohio; Levi Grant of Longview; and Joe Segelke of Bridge City.