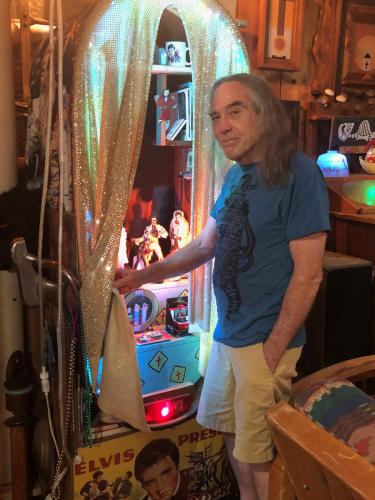 Wally Knight is among the local artists who have contributed works to the annual 12x12 fundraiser benefitting students in the SFA School of Art.


NACOGDOCHES, Texas – Silent bidding for artwork in the annual 12x12 scholarship fundraiser for the Friends of the Visual Arts at Stephen F. Austin State University is now in the final week at The Cole Art Center @ The Old Opera House in downtown Nacogdoches.

Multiple pieces have been generously donated by a local artist who has contributed a piece to every auction fundraiser since its inception. Wally Knight has been central to the Nacogdoches art scene since the 1970s. Much of his work could be described as assemblage, but a visit to his home studio reveals that Knight surrounds himself with creative expression, not only his own, but that of his friends and fellow artists. Nacogdoches “has a very deep well of art,” says Knight.

Knight also works as a carpenter, and he initially approached his art in the same way as his work. Coincidental influences helped him to see that he needed to allow the connections to appear, rather than planning them. He describes himself as the machine that assembles the pieces as the objects reveal themselves. “Basically, everything is connected,” he said. “What I do is just push some of that closer together. The ordinary becomes the extraordinary, and the function of it is no longer important.”

Knight’s pieces are always a highlight of the 12x12 event, often creating bidding wars. “I first noticed Wally’s work at the first fundraiser I attended several years ago,” says Crystal Hicks, Friends of the Visual Arts event committee chair. “Many of the works were exciting and were generating attention, but Wally’s stood out. The audience always looks forward to seeing what he’s contributed. Nacogdoches is lucky to boast a thriving art scene, and Wally has been integral to keeping it going.”

The silent auction features 12x12-inch pieces of art which are currently on display and may be bid on up until 4 p.m. on Saturday, July 20. Anyone may silently bid on the unique one-of-a-kind pieces. Beginning at 6 p.m. that night, the starting bid for art pieces without previous bids will be lowered to $100. The auction closes at 7:15 p.m., and winners for all pieces will be announced at 7:30 during the art party. Pieces without bids at 7:15 will be awarded in a raffle.

The purpose of 12x12 is to raise funds for the FVA scholarships and grants that are awarded to SFA art students. The Cole Art Center is located at 329 E. Main St. For more information about 12x12 or to become a sponsor, call The Cole Art Center at (936) 468-6557.