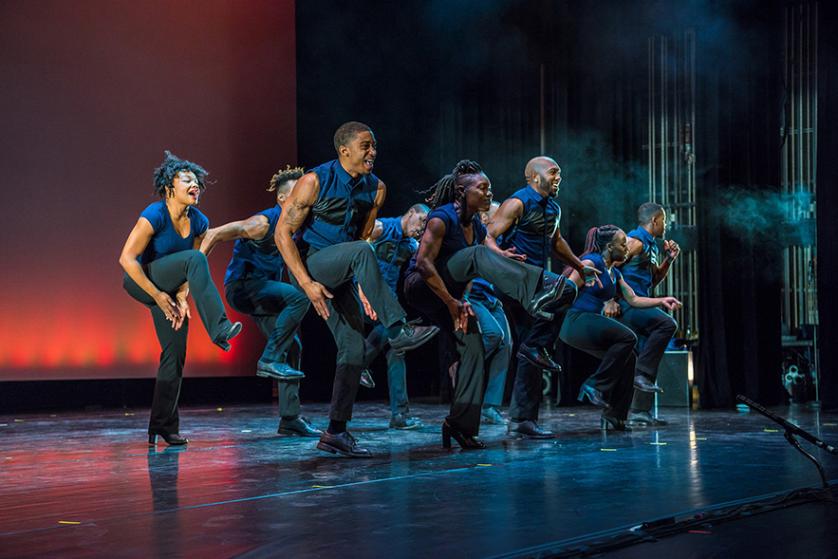 Step Afrika! to perform at SFA

Presented by the College of Fine Arts and sponsored by Nacogdoches Medical Center, Step Afrika! will perform at 7:30 p.m. Friday, Jan. 25, in Turner Auditorium on the SFA campus. Photo credit: Sekou Luke

The performance, sponsored by Nacogdoches Medical Center Health Network, is presented by the SFA College of Fine Arts in partnership with the Nacogdoches Alumnae Chapter of Delta Sigma Theta Sorority, Inc. and in cooperation with SFA’s Office of Multicultural Affairs and Greek Life Office.

Step Afrika! is one of the top ten black dance companies in the United States.

“The awe-inspiring commitment, talent, skill and teamwork in Step Afrika! performances make them the most exhilarating dances that I have ever seen,” said Scott Shattuck, associate dean of the College of Fine Arts and director of the University Series. “Drawing on a rich and multifaceted cultural background, this company propels audiences out of their seats with a feeling that combines the best of a hair-raising sporting event, a jaw-dropping historical revelation, an electrifying concert and an incredibly fun party.”

“Delta Sigma Theta Sorority is pleased to partner with the College of Fine Arts to promote this exciting performance of Step Afrika!,” said Lenora Foy, president of the Nacogdoches Alumnae Chapter.

In the early 1900s, African American college students in sororities and fraternities developed stepping as a way for members of these organizations to show pride and unity. C. Brian Williams, the founder and executive director of Step Afrika!, attended Howard University in Washington, D.C., where he learned how to step. Later, he visited South Africa and saw a young boy dancing a style that looked very similar to stepping. Recognizing the connection, Williams wanted to find a way for Africans and Americans to share their dances, music and culture. In 1994, he founded Step Afrika! as the first professional company dedicated to the tradition of stepping.

Committed to arts education since its inception, Step Afrika! presents the art, values and culture of stepping to students of all grades and backgrounds. While in Nacogdoches, company members will conduct master classes for SFA students and for teenagers in the community.

“I learned that stepping has deep roots in higher education,” Shattuck said, “and SFA’s Greek organizations have their own strong tradition of stepping.” Shattuck said that Step Afrika! is also committed to student success. “This professional dance troupe does so much more than create and entertain.  Their mission to inspire diverse young people to attend and complete college is equally meaningful.”

Prior to the performance, Saville Harris, assistant director of student engagement (Greek life) for SFA’s Student Affairs Programs, will present an informative talk at 7 p.m. in Griffith Gallery. The gallery is located across the hall from Turner Auditorium, which is inside the Griffith Fine Arts Building, 2222 Alumni Drive. The audience is invited back to the gallery for a post-performance reception to meet the performers and to honor the corporate sponsor.