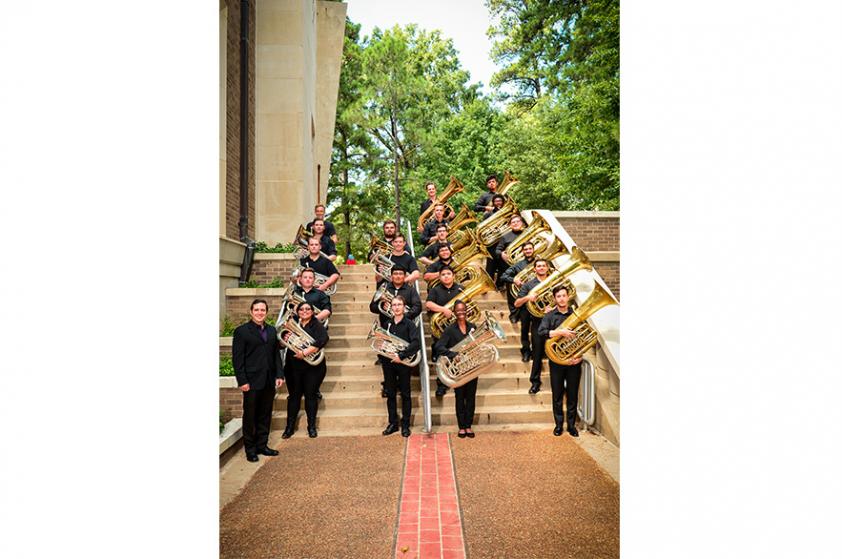 SFA’s Tuba-Euphonium Ensemble will perform a pop-up concert from 1 to 2 p.m. Friday, May 10, outside the Stone Fort on the SFA campus.


NACOGDOCHES, Texas — The Stone Fort Museum on the campus of Stephen F. Austin State University will host its third pop-up concert featuring members of the SFA Tuba-Euphonium Ensemble from 1 to 2 p.m. Friday, May 10.

The concert will feature traditional Texas tunes performed by the ensemble, which is led by Dr. J.D. Salas, SFA associate professor of music.

“When people think of a group of tubas playing together, thoughts of massed pachyderms may immediately spring to mind,” Salas said. “However, the euphonium, which is similar to a tuba but about half the size, has a higher and lighter sound and performs most of the melodies. Together, the two instruments create an ensemble that possesses remarkably sonorous timbre and a wide dynamic range.”

This concert is the continuation of the Stone Fort Museum’s Inside-Out project; intended to reduce barriers to collections and their stories through outside displays and events that engage new audiences.

“Hosting the inside-outside events is a way to attract members of the SFA and Nacogdoches communities to come to events outside the Stone Fort and then encourage them to step inside and continue the experience,” Carolyn Spears, director of the Stone Fort Museum, said.

The Stone Fort’s current exhibit is “Pocket, Purse and Pack: Digging into Everyday Carry.” The exhibit examines not only the various tools and objects that were considered necessities of daily life for past generations but also looks at why they were necessary.

According to Spears, the things we carry may be directly tied to common needs, as is the case with a pocket watch. They also may reflect our habits, interests or beliefs, as with snuff boxes, pocket binoculars or religious icons.

“What we carry in our pockets changes as society changes, “Spears said. “Highlights of the exhibit include a pocket-dump station where guests can take a picture of the baubles and knick-knacks they can’t leave home without.”

The concert is free and open to the public. Guests will be able to snack on old-fashioned picnic fare. For more information about the Stone Fort, its exhibits or the Inside-Out series, contact Spears at cspears@sfasu.edu.