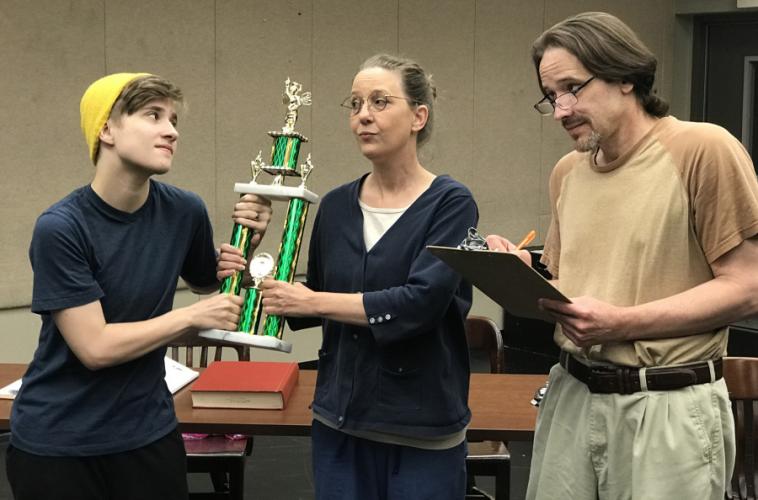 Jason, Roz and Jamie Couch rehearse a scene from “The 25th Annual Putnam County Spelling Bee,” a feature of this year’s SummerStage Festival at SFA. The festival runs June 27 through July 12 and also features the children’s show “The Reluctant Dragon.”

Jamie and Rosalyn Couch and their son, Jason, will perform together as characters in the musical comedy in W.M. Turner Auditorium in Griffith Fine Arts Building – the same building where SFA students Jamie and Roz first met while auditioning for a play some 27 years ago.

“My husband and I first met at an audition in 1992 for a Downstage Theatre production of ‘Overruled’ by George Bernard Shaw,” Roz said. “We were cast as husband and wife. Little did we realize that not only would we be married in real life six years later, but we would one day have a son, Jason, who would be a theatre student at our alma mater. Now, we have the incredible privilege of treading the boards of Turner Auditorium again, this time as a whole family.”

The SFA School of Theatre’s SummerStage Festival runs June 27 through July 12, and in addition to “The 25th Annual Putnam County Spelling Bee,” it features the beloved children’s story “The Reluctant Dragon.” The festival is sponsored in part by Tipton-Ford-Lincoln.

“The 25th Annual Putnam County Spelling Bee,” with music and lyrics by William Finn, book by Rachel Sheinkin, conceived by Rebecca Feldman, with additional material by Jay Reiss and originally directed on Broadway by James Lapine, is about an eclectic group of sixth graders who make their way through a spelling competition where each, eager to win, reveals his/her hopes, struggles and passions through songs.

In “Bee,” Roz plays Rona Lisa Peretti, the very enthusiastic organizer of the competition. She keeps the spelling bee running smoothly and provides color commentary about the spellers. Jamie plays Vice Principal Douglas Panch, a frustrated and somewhat cynical educator who finds his faith in and understanding of human nature both renewed and enriched by the experience of meeting the kids of the bee. Jason plays contestant Chip Tolentino.

“Chip Tolentino has been a fun character to expand on over the course of the rehearsal process,” Jason said. “Although he's used to getting his way, his experiences in the bee take him down a few notches, and he begins to understand that 'life is random and unfair.'”

Growing up in Mesquite, Roz Rommel participated in theatre throughout high school. She was the first female tech director at North Mesquite High School as well as historian for the school’s International Thespian Society Troupe.

“During high school, I participated in SFA’s High School Summer Theatre Workshop,” she said. “The Theatre Department impressed me with its quality and convinced me to choose SFA for my college career.” She came to SFA in 1990 to obtain a Bachelor of Arts degree, double-majoring in theatre and English.”

At SFA, Roz performed in many Mainstage Series productions, including “Once upon a Mattress,” “Talking Pictures,” “Mistress of the Inn,” “Gypsy,” “Pippin” and “Romeo and Juliet.”  She also did technical work for a number of other Mainstage productions and acted in and performed tech work for many Downstage productions.

Jamie’s interest in theatre began as a theatre-goer in high school, but his decision to step onto the stage came in college.

“I was an English major who was seeking greater insight and understanding regarding dramatic literature, especially Shakespeare,” he said. “I didn't want to be an English professor whose knowledge of drama was limited to what was printed on the page. I needed a practical understanding of how the theatre worked. I also wanted the language of Shakespeare to be as familiar to me as my own modern American English. I obtained all that – and so much more.

“In the years since I first auditioned and was cast in a production of ‘Romeo and Juliet’ as a sophomore in college, I've performed in over 40 productions,” he said “I've done musicals, children's shows, many classical plays, and worked with the Texas Shakespeare Festival. I've been an assistant director, a stage manager and a combat choreographer, but the vast majority of my experience has been as an actor. The theatre has enriched my life immeasurably. It's how I met my wife, who also happens to be my best friend.”

Being raised by two people with an extensive amount of experience with theatre greatly influenced Jason’s interest in acting. His first role was in a community theatre production of “A Christmas Carol.” He was 6 and portrayed Tiny Tim.

“I've participated in numerous theatre programs, such as Junior Jacks, and I acted throughout my entire high school career,” he said. “I can't put into words how grateful I am for the opportunity to be in a Mainstage musical.”

Angela Bacarisse, professor of theatre at SFA and director of the play, has known Roz and Jamie for years. Jamie performed in “Hamlet” the first semester Bacarisse was at SFA and again in “Blithe Spirit,” both directed by Allen Oster. Over the years, she has seen Roz perform as different characters at events at Millard’s Crossing Historic Village.

“When it was decided that we were going to do this musical, I knew that I wanted to have real adults play the adult parts,” Bacarisse said. “I asked Roz to participate first, and then we broached the idea of Jamie joining the show. I wanted to work with alumni of the department. And it worked out that they are celebrating an anniversary while we are doing this!” (The Couches will celebrate their 20th wedding anniversary in July.)

It wasn’t until after the adult characters were cast that auditions were held for the students to play the ‘kids,’” Bacarisse said. “It was just good luck and talent that landed Jason in the same show.”

Today, Roz is owner of Rozjam Entertainment, providing singing telegrams and other entertainment in the Nacogdoches area. Jamie is a faculty member in the Department of English and Creative Writing in SFA’s College of Liberal and Applied Arts. Jason is a freshman theatre student at SFA.

“‘Putnam County Spelling Bee’ is a musical, so it’s great fun, and in particular, it’s enormously creative because it includes audience participation and comedic ad libs,” Roz said. “Everyone in the cast is amazingly talented, and I often feel like my character – amazed at their (as Rona says in the play) ‘extraordinary ability.’

“Although Jamie and I performed in several productions together in college, the chance to perform with him as well as Jason may be a once in a lifetime opportunity, so I’m savoring every moment,” Roz added.

“The Reluctant Dragon,” based on the book by Kenneth Grahame and adapted by Mary Hall Surface, is the charming tale of an unlikely friendship between a young boy and a peace-loving dragon, and it’s about overcoming prejudice and fear in a small medieval domain. “The Reluctant Dragon” will be presented at 10 a.m. June 27 and 28 and July 5, 8, 10 and 11; at 2 p.m. June 27; and at 6:30 p.m. July 12. General admission tickets are $8.