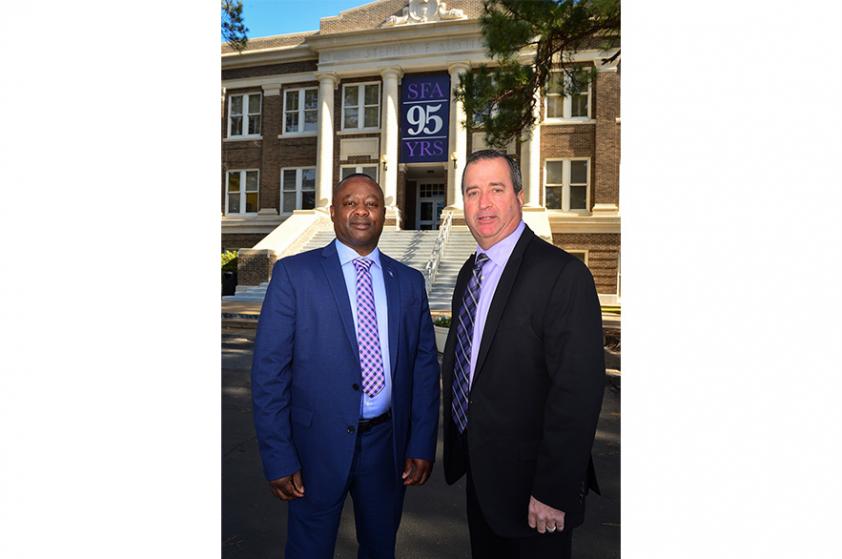 UPD leaders among appointments approved by SFA Board of Regents

John Fields, left, is the new chief of police and Craig Goodman is assistant chief of police for Stephen F. Austin State University. Their appointments were approved by SFA’s Board of Regents during a meeting Tuesday.


NACOGDOCHES, Texas — The Stephen F. Austin State University Board of Regents approved appointment of two new leaders for the University Police Department during its Tuesday meeting

John Fields will serve as chief of the SFA department. Fields served as director of public safety and chief of police at Albany State University in Albany, Georgia, since 2011, after serving as assistant chief of police and chief investigator from 2007-11. He brings a background in municipal law enforcement, having served in a variety of roles for the Dougherty County Sheriff’s Office, before rising to the rank of operations captain in 2001.

He holds a Bachelor of Arts in political science, a Master of Public Administration and a Master of Science in criminal justice, all from Albany State University. Fields is a decorated veteran of the U.S. Army, serving in Operation Desert Storm.

“The chief of police position impacts our entire campus, and we are pleased to have found such an exceptionally qualified candidate,” said Dr. Adam Peck, interim vice president for university affairs.

Fields replaces Marc Cossich, who is currently serving as chief of police at the University of West Florida in Pensacola.

Craig Goodman was approved as assistant chief of the SFA department. Since 2015, Goodman has served as chief of police in Brenham after working in a variety of roles at the Pasadena Police Department. He received his Bachelor of Business Administration from SFA and a Master of Science in criminal justice from the University of Houston-Downtown. In 2008, he was selected to participate in the FBI National Academy.

Additional changes of status approved include:

The board approved the retirements of four individuals who have a combined 92 years of service to the university. Retirements include Chris Barker, associate professor of geology; Jack Ethridge, professor of accounting; David Justus, ITS compliance coordinator; and Donna Mettier, ITS programmer/analyst III.