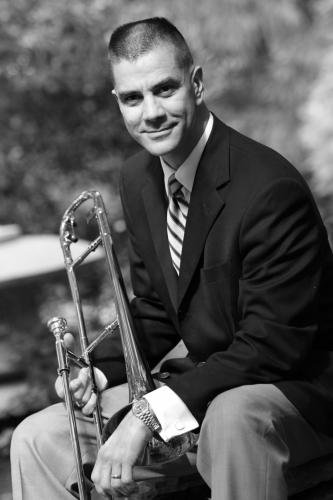 The concert will also feature the Swingin’ Aces, directed by Dr. J.D. Salas, professor of tuba and euphonium at SFA.

Much of the concert will feature the trombone players from the Swingin’ Axes, directed by Dr. Deb Scott, professor of trombone in the SFA School of Music, as well as some of Ebo’s compositions for jazz band. Among them is “Trombonius Rex,” a fast bebop style tune that will feature Ebo, the entire Axes trombone section and Scott. The Axes will also perform Ebo’s “Sunset Parade,” composed in the Count Basie ballad style, and “Basie Training,” a spoof on basic training, also written in the Count Basie swing style of jazz.

A versatile musician, Ebo will sing one of Natalie Cole’s most famous jazz standards, “Almost Like Being in Love,” with arrangement by Bill Holman.

Ebo is the former head of the Instrumental Division at the Naval School of Music in Virginia Beach where he also served as trombone faculty and jazz improvisation instructor. He is currently serving as the music placement director for the Marine Music Program in the Southwestern United States. An active clinician, educator and performer, Ebo holds degrees from Indiana University and the University of South Carolina. He has played with numerous artists in both military and civilian settings including Natalie Cole, Frank Sinatra Jr., Johnny Mathis, Jon Faddis, Michael Mossman and Tim Akers & the Smoking Section.

Ebo is a recipient of the Musician of the Year Award for the U.S. Marine Corps and has performed nationwide as the musical director and lead trombonist for the Marine Corps Jazz Orchestra. His compositions and arrangements have been featured as part of USMC national recruiting efforts and have been performed by numerous ensembles. He is the author of “Common Sense for Comeback Chops,” published by Mountain Peak Music.

Ebo also directs his own jazz orchestra in a series of benefit concerts for Toys for Tots in Baltimore, M.D., now in its 17th season, including eight years of annual concerts also held in Virginia Beach. Ebo resides in Fort Worth with his wife, also a professional musician, and their two children, who collectively sing and play trumpet, harp, piano, ukulele, drums and other instruments.