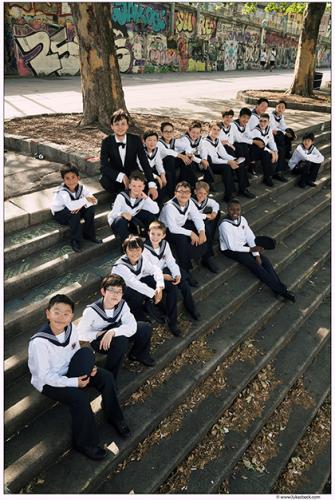 
NACOGDOCHES, Texas – The Vienna Boys Choir, renowned as one the finest vocal ensembles in the world for more than five centuries, will perform “Journey Through the Americas” in concert at 7:30 p.m. Thursday, Nov. 21, in W.M. Turner Auditorium on the campus of Stephen F. Austin State University.

A special Encore Event presentation of the SFA College of Fine Arts, the concert is sponsored in part by Commercial Bank of Texas.

“On their last visit to Nacogdoches in 2012, the Vienna Boys Choir sold out Turner Auditorium,” said Scott Shattuck, associate dean of the College of Fine Arts and director of the University Series and Encore Events. “So it’s especially important for music-lovers to order their tickets well in advance for this very special event. It’s truly a thrill to have such an internationally renowned choral group visit SFA again.”

“Journey Through the Americas” includes favorite Strauss waltzes, classical masterpieces by Verdi and Beethoven, modern-era works by Bernstein and Gershwin and folk songs from around the world. The program includes a performance of “Amazing Grace” arranged by John Coates.

The Vienna Boys Choir can trace its history as far back as the 13th century, but it was formally established at Vienna Imperial Chapel in 1498 by Holy Roman Emperor Maximilian I. The many incarnations of the group have been performing continuously ever since.

Today’s Vienna Boys Choir is comprised of talented young singers from all over the world who are admitted by audition. One-hundred choristers between the ages of 10 and 14 are divided into four touring groups. Each spends 11 weeks of the year on tour. Between them, the choirs give around 300 concerts each year, attended by almost half a million spectators around the globe.

The choir currently on tour in the U.S. includes boys from Austria, Germany, Japan, Korea, Poland, Czech Republic, Mongolia, Bosnia and Herzegovina. The choir’s conductor, Manuel Huber, the most recent addition to the ranks of choirmaster of the Vienna Boys Choir, is from Italy and has extensive experience as a voice coach, choir director and music educator in a variety of positions throughout Europe. Prior to his appointment with the Vienna Boys Choir, he was musical director of the Youth Project at the Gut Immling Opera Festival, a voice coach with the highly regarded Tölzer Knabenchor, and guest conductor of Kammerphilharmonie Budweis, Bad Reichenhaller Philharmonie, and Salzburg’s Mozarteum University Symphony Orchestra.

Prior to the SFA performance, Dr. Tod Fish, assistant professor and associate director of choral activities in the SFA School of Music, will present an informative talk at 7 p.m. in Griffith Gallery. The gallery is located across the hall from Turner Auditorium, which is inside the Griffith Fine Arts Building, 2222 Alumni Drive. The audience is invited back to the gallery for a post-performance reception to honor the show’s corporate sponsor.

On the night of the concert, the College of Fine Arts will team up with the SFA Office of Student Engagement to collect non-perishable food items for The Pantry at SFA, which is the food pantry designed to assist SFA students in need. Any non-perishable food item will be accepted, but current special needs are canned fruit, variety boxes of oatmeal packets and canned entrees, such as Chef Boyardee ravioli, spaghetti, etc.

Encore Event tickets are $45 for Section A seating; $36 for Section B seating; and $27 for Section C seating. Discounts are available for seniors, students, children and SFA faculty and staff members, ranging from $3 (for SFA students) to $36 tickets, depending on discount type. For more information or to purchase tickets, visit finearts.sfasu.edu, stop by the Box Office in Room 211 of the Griffith Fine Arts Building, or call (936) 468-6407 or (888) 240-ARTS.