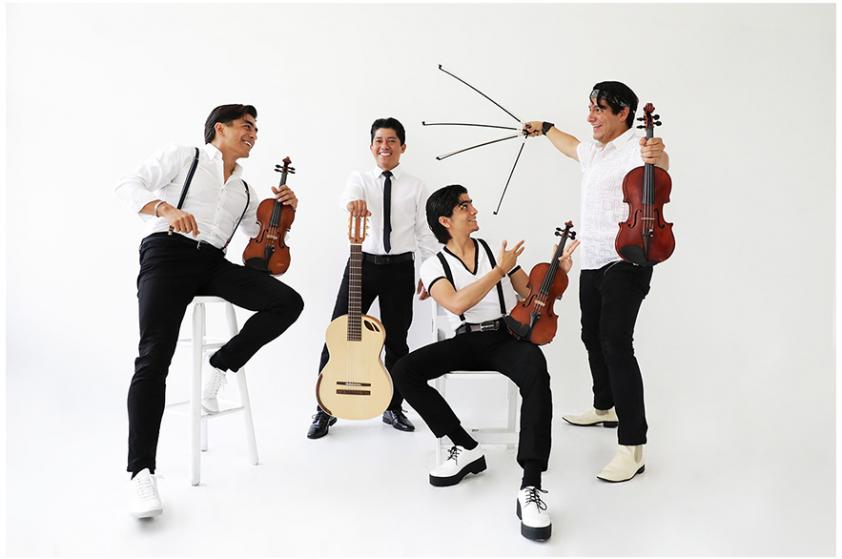 Presented by the College of Fine Arts and sponsored by BancorpSouth, the Villalobos Brothers will perform at 7:30 p.m. Thursday, May 9, in Turner Auditorium on the SFA campus.


NACOGDOCHES, Texas – Acclaimed as one of today’s leading contemporary Mexican groups, the Villalobos Brothers will bring their high-octane musical fiesta to Nacogdoches when they perform at 7:30 p.m. Thursday, May 9, in W.M. Turner Auditorium on the campus of Stephen F. Austin State University.

The performance is the final show of the SFA College of Fine Arts’ 2018-19 University Series, ending the season in a celebration of Mexican folk music that skillfully blends intricate jazz and classical harmonies and rock-and-roll energy with the traditional sounds of the brothers’ native country, according Scott Shattuck, associate dean of the College of Fine Arts and director of the series.

“I was blown away by the fiery performing style and infectious charm of the Villalobos Brothers when I heard them live,” Shattuck said. “Ever since then, I’ve been dying to bring them from their home base in New York City to SFA and introduce Nacogdoches audiences to the fun and passion they bring to their concerts.”

The ensemble’s virtuosic performances have delighted audiences throughout Latin America, India, Russia and Canada and in more than 30 states across the U.S. They have performed in historic venues and at events including Carnegie Hall, Lincoln Center, the New Victory Theatre on Broadway, the Latin Grammy Awards, Montreal Jazz Festival, the 60th Anniversary of the United Nations and the 66th FIFA Congress in Mexico City.

In 2013, the Villalobos Brothers won New York’s Ultimate Battle of the Boroughs, a citywide talent contest for bands of all genres and styles. Their album “Somos” will be released this year.

The Villalobos Brothers’ performance in Nacogdoches is sponsored in part by BancorpSouth. Additional show parking will be available at the bank’s North Street location. The College of Fine Arts has partnered with the SFA Office of Multicultural Affairs to promote the show.

“We’re so grateful to BancorpSouth and the rest of our sponsors, advertisers and other partners for making this event possible,” Shattuck said. “Along with them we’re celebrating the diversity and vitality of our campus and the entire Deep East Texas region by welcoming this award-winning group to SFA.”

Prior to the performance, Juan Carlos Urena, professor in the Department of Languages, Cultures and Communication, will present an informative talk at 7 p.m. in Griffith Gallery. The gallery is located across the hall from Turner Auditorium, which is inside the Griffith Fine Arts Building, 2222 Alumni Drive. The audience is invited back to the gallery for a post-performance reception to meet the performers and to honor the corporate sponsor.