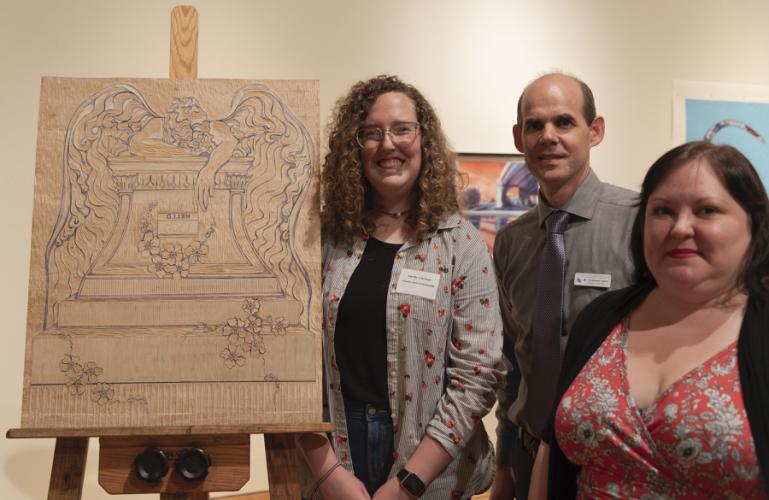 Yoakum senior art student Lucille Coleman, left, has been selected as this year’s Charles D. Jones Art Scholarship recipient at Stephen F. Austin State University. The award is presented by the Friends of the Visual Arts. Pictured with her are SFA School of Art Director Christopher Talbot and FVA President Crystal Hicks.


NACOGDOCHES, Texas – Lucille Coleman has been selected as this year’s Charles D. Jones Art Scholarship recipient at Stephen F. Austin State University. A post-baccalaureate student from Yoakum, Coleman’s major concentration is in drawing and her minor concentration is in printmaking in SFA’s School of Art.

Neal Cox, associate professor/printmaking coordinator, nominated Coleman for the scholarship. In his nomination letter, Cox noted: “Though Lucille’s major concentration is drawing, she spends most of her time in the printmaking studio. She would be a printmaking major had she discovered the media earlier in her academic experience. As it is, she graduated in December with 15 credits in printmaking, exceeding the required course load for a minor concentration. She plans on pursing printmaking in her graduate level studies.”

Cox described Coleman as “my hardest working student by far,” adding she gets to class every morning before everyone else, “including myself, and just gets to work.”

“She has grown by leaps and bounds in the year since she enrolled in her first printmaking course,” Cox wrote. “While her skill level continues to grow, her ideas are also developing nicely. She completed much of her B.F.A. final project many months before she was due to have a show.

“While her work ethic, alone, qualifies her for the scholarship, Lucille possesses that rare ability to get along with all her classmates,” he said. “She politely avoids any conversation that degrades anyone, and in some cases, has spoken up when she feels others have gone over the line, as so many students often do. She offers and receives critical feedback with required objectivity.”