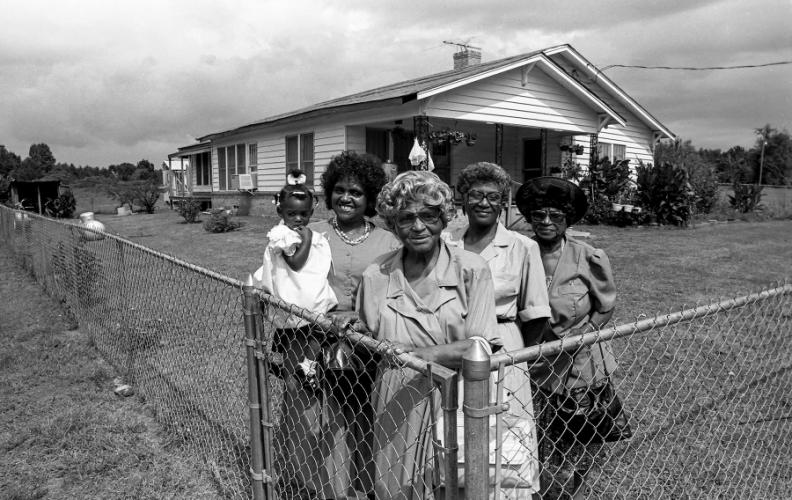 A traveling exhibition of local photographer Richard Orton’s images of the Upshaw family of Nacogdoches County will be on display July 7 through Aug. 15 at The Cole Art Center @ The Old Opera House in downtown Nacogdoches.

The photographs, which have been featured in an exhibition that’s been traveling across Texas for the past three years, are the focus of Orton’s book, “The Upshaws of County Line: An American Family,” which is a documentation of the County Line community’s history through photographs and oral histories of the families who lived there. Orton became acquainted with the Upshaw family, which had lived for decades in the northwest Nacogdoches County community of County Line, in the late 1980s and began taking photographs for this project, which evolved into a book that was published by the University of North Texas Press in 2014 after 25 years of preparation.

John Handley, director of art galleries at SFA, and Chris Talbot, director of the SFA School of Art, began discussing the possibility of turning Orton's photo project into a traveling exhibition in 2016. After a number of art venues, including universities, expressed interest, the show was printed, framed and prepared for touring. It has been seen in venues at Southwestern University, the Institute of Texan Cultures, Angelina College, Denton UNT Gallery on the Square and the Museum of Big Bend at Sul Ross State University, among others. It last closed in Midland at Midland College at the end of February this year.

Following its display in Cole Art Center next month, the exhibition will become permanently located in a city facility, according to Orton.

“Our plan is to give the exhibit to the City of Nacogdoches as part of its soon-to-be-created collection at the restored Zion Hill Baptist Church,” Orton said. “The city has assured us that the exhibit will continue to be made available to other venues, and that a marketing plan will be made toward that end.”

“Though my early visits to County Line were motivated primarily by curiosity and surprise that such places existed (nothing about them in history class), I was drawn in by the warmth of the people who lived there, beginning with Edward Monel and Leota Freeman Upshaw,” he said. “After 25 years, I felt obligated to do something to express my gratitude. That’s when the book started taking shape, and then John Handley made the exhibit possible.

“The Upshaw family has changed my life for the better, and this exhibit is my attempt to say, ‘Thank you,’” he added.

Seven of the nine venues in which the show was exhibited had an opening event that Orton attended. An Upshaw family member attended three of those to talk about the photo project.

“Something I noticed at several of these openings was the way that white people responded to it and the way black people responded,” Orton said. “White folks seemed taken by a history and reality that they did not know about before, and the black folks would say something like ‘that looks like my family.’”

“The Upshaws of County Line: An American Family” is the winner of Ottis Locke Best Coffee Table Book Award from the East Texas Historical Association. The more than 50 duotone photographs and text convey the contemporary experience of growing up in a "freedom colony."

“I must admit that I knew nothing of the history of freedom colonies in the United States prior to moving to Texas in 2012,” Handley said. “This is partly because there simply is not much information about the subject available, and also, I feel that having been born and raised on the West Coast, I had little opportunity to learn about them.”

A few years after working as the director of the SFA art galleries, Handley recognized the opportunity to transform the Upshaws’ story into a traveling exhibition. The book format was expanded into an exhibition (framed photographs and text panels), marketing materials were developed, and the exhibition was made available to a wide range of institutions at a very low cost.

“After nine venues, Richard and I agreed that it was time to ‘retire’ the exhibition, but only in a meaningful way – as a gift to an appropriate institution,” Handley said. “Eventually, working with Jessica Sowell with the historic sites here in Nacogdoches, we agreed to transfer the exhibition to the city where it can be further utilized.”

With the advent of CODID-19, SFA art galleries were closed to the public, and summer exhibitions were canceled. However, Cole Art Center will reopen to the public on July 7.

“Considering the rise in awareness about racism and the political climate in the United States, and after talking with both Richard Orton and Chris Talbot, we felt it only appropriate to offer the full exhibition at the Cole Art Center before transferring it to the city,” Handley said. “We here at the School of Art are very proud of this exhibition and its successful tour. I hope locals take the opportunity to come down and see this show.”

In response to the COVID-19 pandemic, Cole Art Center patrons will be required to wear a mask, practice social distancing, comply with designated entrance and exit routes and follow all other CDC guidelines, including maximum capacity restrictions. Larger groups can be accommodated by appointment. There will be no reception. The exhibition will show through Aug. 15.