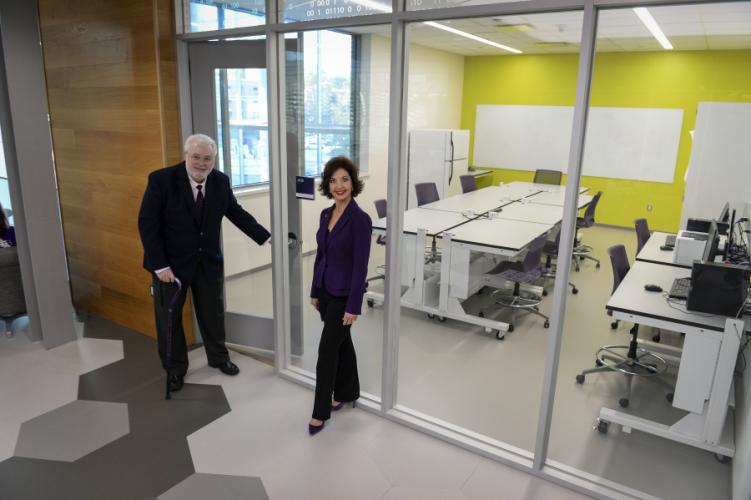 Dr. Harry Downing, professor and former chair of Stephen F. Austin State University’s Department of Physics, Engineering and Astronomy, stands with Dr. Kimberly Childs, dean of the College of Sciences and Mathematics, in front of the Harry and Carolyn Downing Engineering Resource Commons. The SFA Board of Regents recently named two rooms in the Cole STEM Building in honor of Downing and his late wife, Carolyn.


NACOGDOCHES, Texas — For 45 years, Dr. Harry Downing, professor and former chair of the Department of Physics, Engineering and Astronomy, has made a career of serving others at Stephen F. Austin State University.

With a generous gift of support to the college, he has ensured this legacy and that of his late wife, Carolyn, will live on and continue benefitting students. In a recent meeting, the SFA Board of Regents named two rooms in the Cole STEM Building in their honor, the Harry and Carolyn Downing Physics Resource Commons and the Harry and Carolyn Downing Engineering Resource Commons.

“Dr. Downing has invested his time and talent and dedicated his career to this university,” Gordon said. “His willingness to also invest financially in the education of SFA Lumberjacks is a visible manifestation of his devotion to our students. The Downings’ investment sets a benchmark for every SFA employee in demonstrating a firm belief in the university’s mission.”

Natives of Manila, Arkansas, Downing and Carolyn Brady were married in 1965 and celebrated 54 years together. Carolyn served as a licensed practical nurse for 40 years, working for Dr. Aaron Polk of Nacogdoches.

“When I took the required physics course, I was doing very well,” Downing said. “The professor convinced me that physics was a better fit for me than engineering. In retrospect, my professor was right about it being a better fit.”

Downing joined the faculty in SFA’s Department of Physics, Engineering and Astronomy in 1975 and became chair in 1988. He taught courses in general physics, introduction to engineering/physics, technical physics, engineering statistics, engineering dynamics and mathematical applications in physics. Downing was named 2013-2014 Regents Professor and received teaching excellence awards from both the Department of Physics, Engineering and Astronomy and the College of Sciences and Mathematics.

“I considered myself to be a good teacher with my ways of doing things,” Downing said. “When I became chair, I remember deciding to not impose my teaching style on the faculty. Guide them but not force them.”

This trust among the faculty was something Downing consciously strove to facilitate and promote within the department.

“It’s simple – I had great faculty,” he said. “We recruited well for new faculty, always making sure the new faculty met our qualifications but also were congenial. Harmony in the workplace makes for a great work environment.”

While an undergraduate, Downing made extensive use of a small area near the physics faculty offices to study, leading to his desire to provide the same type of space for students at SFA.

“This quiet area for study and quick access to faculty help was very valuable to me, and I wanted to see this for our students at SFA,” he said. “When we worked on designing the Cole STEM Building, we made sure that such rooms would be included.”

The rooms provide a workspace with computers for students to utilize between and after classes, as well as refrigerator and microwave access and lounging areas.

“As the department chair within the College of Sciences and Mathematics for more than 31 years, Dr. Downing impacted thousands of lives through his teaching, research, service and departmental leadership,” said Dr. Kimberly Childs, dean of the College of Sciences and Mathematics. “Today, the Physics Resource Commons and the Engineering Resource Commons, dedicated spaces for students to study, are named in his honor.”

Learn more about the Department of Physics, Engineering and Astronomy at sfasu.edu/physics.