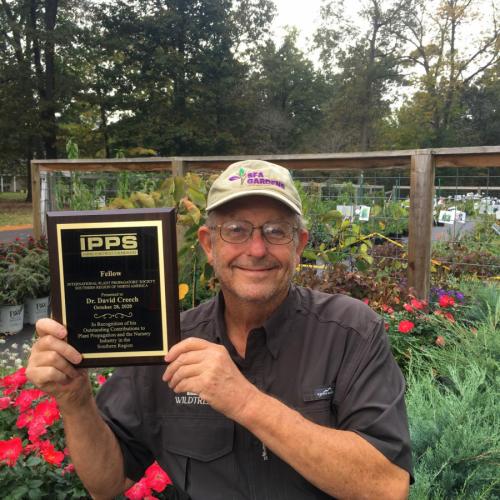 The award honors individuals for ongoing contributions to the nursery industry and plant propagation in the Southern region.

Creech has been a member of the International Plant Propagators’ Society for more than 30 years and previously received the Sidney B. Meadows Award, which is the highest honor bestowed by the organization.

“While I’m a member of several societies, there is no doubt the International Plant Propagators’ Society is my favorite, simply because it is a blend of academics and industry,” Creech said.

According to Creech, the organization has long served SFA students through professional development and employment opportunities offered during the organization’s annual conference.

“Many students have made great contacts and found jobs with some of the most progressive nurseries and landscape firms across the Gulf South,” Creech said. “Because of our students, we put SFA on the map, and the friendships I made in the organization have lasted for decades.”

The International Plant Propagators’ Society is a global network of plant production professionals that aims to improve the knowledge, skills and professionalism of its members through educational conferences, field days, seminars and a vast library of horticultural knowledge.