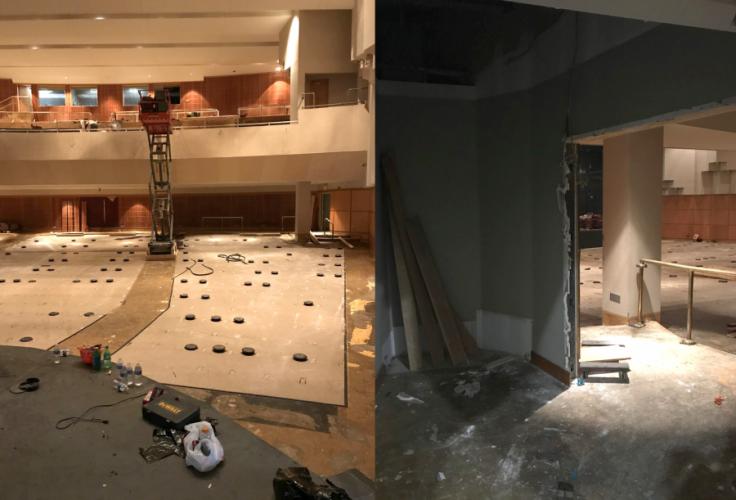 W.M. Turner Auditorium in Griffith Fine Arts Building is getting a “refresh” as a result of the Fine Arts Expansion Initiative, which will extend the building along North Street. The renovated and expanded state-of-the-art building will also include two dance studios, two new theatres, recording studio, sound stage, audio and video editing rooms, an art gallery, multiple classrooms, rehearsal facilities, faculty offices and the offices of the College of Fine Arts dean. The facilities will house the CFA’s sound recording technology, filmmaking, theatre, dance and musical theatre programs.


NACOGDOCHES, Texas – Motorists driving along North Street past the campus of Stephen F. Austin State University will see an extraordinary transformation in the next two years.

Although the rest of campus is slowly opening back up after closing because of the COVID-19 pandemic, the long-awaited renovation and new construction to the Griffith Fine Arts Building is on schedule. Demolition is moving full speed ahead, laying the groundwork for a building project that will make the College of Fine Arts a “window” through which the community may view the university, according to Dr. A.C. “Buddy” Himes, dean of the College of Fine Arts.

SFA Regents approved the expansion and renovation project in 2018, and the architectural design phase began the following spring. Funding was obtained through the issuance of bonds in 2019, and proceeds must be used, in accordance with the bond documents, for construction, renovation and other project-related purposes.

In recent months, the College of Fine Arts dean’s staff has relocated to Miller Science Building, and the School of Theatre has relocated to McKibben Education Building, with the exception of the costume shop, which is also temporarily housed in Miller Science Building. The School of Music’s Sound Recording Technology program, which had been housed in the Griffith building, has also relocated to the McKibben building. The Fine Arts Box Office is now in the Kennedy Auditorium building during the two-year construction project.

More than two decades in the making, the Fine Arts Expansion Initiative will include extensive renovations to the existing Griffith Fine Arts Building and add handicap parking, a patron drop-off zone (off of West College Street) and new construction which will extend the building along North Street nearly to the corner of West College Street. The renovated and expanded state-of-the-art building will include two dance studios, two theatres, an auditorium, recording studio, sound stage, audio and video editing rooms, an art gallery, multiple classrooms, rehearsal facilities, faculty offices and the offices of the dean. The facilities will house the CFA’s sound recording technology, filmmaking, theatre, dance and musical theatre programs.

As a result of the building and Turner Auditorium’s temporary closure during construction, coupled with the onset of the pandemic, the University Series has been significantly curtailed for the 2020-21 season, according to Scott Shattuck, associate dean and director of the series. There may be no performances in the fall, and the spring season will have an event-by-event approach with alternate venues for performances.

“We were already thinking creatively about venues for world-class performances,” Shattuck said, “and now we’re also doing our best to be astute about safe practices for artists and audiences, and about the economic realities of presenting the performing arts in a socially distanced context.

“The ever-changing conditions in which we live have caused us to keep our plans as flexible as possible,” Shattuck added. “Rather than lay out a schedule which may require many changes in the months ahead, we’ll announce individual concerts and shows when we’ve gained confidence that our audience can safely experience them when, where, and how we’ve said they will.”

The Children’s Performing Arts Series has been canceled for the coming year. However, CPAS will have a new and exciting online presence so that teachers may still incorporate the unique children’s series curriculum into lesson plans, according to Diane Peterson, Fine Arts Box Office manager and director of the children’s series.

“Even though teachers and students can’t visit us this school year, we hope cpas.sfasu.edu will be your source for the arts,” Peterson said. “You’ll find materials and links to bring the arts easily and safely into your classrooms.”

As the Griffith building’s new look evolves over the next two years, “we believe the community will be highly impressed with the image fine arts projects for the university,” Himes said.

“This is an exciting time for the College of Fine Arts,” Himes said. “With all the bad news that 2020 has brought, we’re glad the College of Fine Arts is able to move forward in a positive and progressive direction that will continue to focus on providing comprehensive and quality visual and performing arts experiences for the university, our Nacogdoches community and all of East Texas.”

To view design plans and artists renderings, and to stay up-to-date on construction progress, visit finearts.sfasu.edu/expansion.