Lessons from SFA’s Kennedy Auditorium: You can do theatre anywhere! 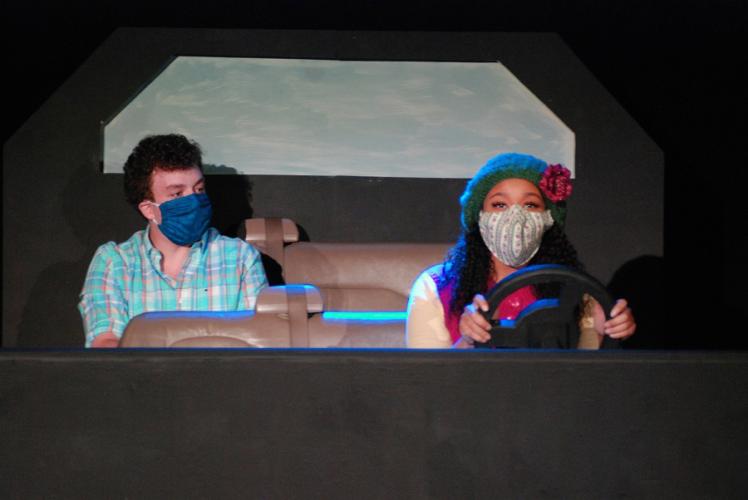 Frisco junior Benjamin McElroy as Mike, and Glenn Heights freshman Kennedy Jordan as his driver, Sue, are among the cast members in the SFA School of Theatre’s presentation of “Rideshare/Overshare” running through Saturday, Nov. 14, in Kennedy Auditorium on the SFA campus. The play will also be livestreamed. Visit boxoffice.sfasu.edu or call (936) 468-6407 for ticketing or virtual access information.


NACOGDOCHES, Texas – There are still some opportunities to see the Stephen F. Austin State University School of Theatre’s presentation of Ian McWethy and Carrie McCrossen’s play “Rideshare/Overshare” at 7:30 nightly through Saturday, Nov. 14, in either an in-person performance in Kennedy Auditorium on the SFA campus or through virtual access.

SFA theatre Professor Angela Bacarisse, the play’s director, describes the play as “just a nice story with some quirky folks inhabiting it.” Mike and Elaine, a young couple heading out to meet each other on a blind date, each decide independently to take an UBER to get to their destination, and then they find themselves paired with the weirdest drivers on the road.

One reason that “Rideshare/Overshare” found its way into this year’s Mainstage Series is  “because it can be produced very simply,” Bacarisse said. And “simply” is what was needed, because this year’s (and next year’s) “mainstage” for the School of Theatre will be Kennedy Auditorium. The College of Fine Arts and School of Theatre no longer have access to Turner Auditorium in Griffith Fine Arts Building because of a planned renovation/construction project that will take two years to complete. As a result, Kennedy Auditorium has become the main performance space for theatre students, and technical aspects need to be kept at a minimum because of facility limitations. The biggest lesson learned through facility limitations: you can do theatre anywhere!

“I have worked on theatre in gyms, church basements, lecture halls, old gas stations and even circus tents,” Bacarisse said. “Kennedy Auditorium has its challenges, but at least we didn’t have to install the seating!”

There are aspects of Kennedy that are similar to a high school auditorium, specifically the linoleum floor. But there are theatrical ways that you can make Kennedy into a theatre, Bacarisse said.

“Those students who have experienced the Edinburgh Festival Fringe in Scotland with me know that you can do theatre anywhere,” she said. “Just hang up some black curtains and go. The major challenge is that there was no consideration made for the humanness of the people performing on ‘stage’ in Kennedy. There is no place to change your clothes in private, and there are no private restrooms for actors.

“And there’s no place that isn’t on stage,” she added. “So we had to make it up. We created new ways of doing things, but they aren’t all that different from working off-Broadway, or doing theatre in a space that used to be a store-front. You create what you want it to be.”

Lack of theatrical elements, floor, pipes, places to put lights and curtains … those are some of the physical challenges.

“But you can bring those in, and you can have scenery that doesn’t have to fly out,” Bacarisse said. “When you have to work without technology that you are used to, you have to be more creative.”

The students who are working on “Rideshare/Overshare” are going to be more prepared to work in places that Bacarisse describes as “non-traditional theatres.”

“And that is great, because there is a lot of work that happens in non-traditional spaces,” she said. “Students will be more prepared for solving the challenges when they are faced with them. It does depend on what they had access to in their high school. If they were performing in what I call a ‘café-gymna-torium,’ then Kennedy won’t be that much different. But if they are coming from a school like those in Plano, they will be getting the low-budget side of theatre until we move into the new spaces.

“But in reality, it is unusual to go straight from college to high-budget Broadway,” she said. “You have to work on a lot of low-budget shows first, and for the next two years, our students will master those challenges.”