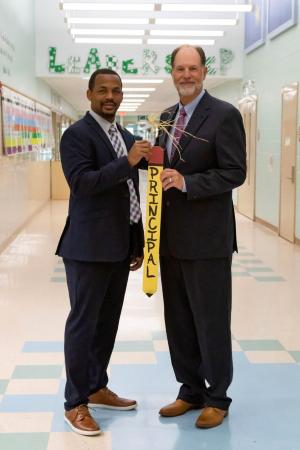 Gerald Fonzie, former assistant principal at Brooks-Quinn-Jones Elementary School in Nacogdoches, accepts the official BQJ principal banner from Tom Miller, who retired as principal this year. Both Stephen F. Austin State University alumni, Fonzie and Miller also share an educational philosophy handed down by Miller’s father, former SFA basketball coach Harry Miller, that helped them work effectively as a team at BQJ for six years together. For his first year as principal, Fonzie’s No. 1 priority is to keep students and faculty safe as the COVID-19 pandemic continues. As a first-year retiree, Miller’s main priorities are playing golf, spending time with his soon-to-be eight grandchildren and helping out at his wife’s store, The Mustard Seed. Photo by Les Linebarger


NACOGDOCHES, Texas — Brooks-Quinn-Jones Elementary School in Nacogdoches said farewell to its principal, Tom Miller, a Stephen F. Austin State University alumnus (1980 and 1996), this year. But former BQJ assistant principal, Gerald Fonzie, another SFA alumnus (2008 and 2010), has been promoted to the role to continue the school’s legacy of Lumberjack leadership.

Before serving as principal and assistant principal for six years together at BQJ, Miller and Fonzie earned master’s degrees in education, as well as their principal and physical education teacher certifications at SFA. They also connected over playing sports growing up and participating in Lumberjack basketball. Miller was a graduate assistant in basketball at SFA from 1978 to 1980, and Fonzie played for the team from 2005 to 2008.

“SFA definitely played a big role in the relationship we have,” Fonzie said. “It allowed us to connect from an education and athletics point of view.”

“I do believe Tom’s and my basketball backgrounds played a big part in our success as a team here at BQJ,” Fonzie said. “We instantly had a connection from day one. We both believe in running a very structured system, and I think we can credit that to Tom’s dad.”

Despite their common paths, Miller didn’t meet Fonzie until summer 2014 when he interviewed him for the assistant principal role at BQJ.

“I knew he was the person we needed after that first meeting,” Miller said. “I feel the connection of both of us being men in elementary education, playing basketball and knowing how to work with others was invaluable in making a winning team.”

Miller said they immediately agreed on how to proceed with leadership at BQJ because they both had an ability to sense what needed to be accomplished and how to succeed through working as a team.

“When one of us was engaged in something we could not pull free from, the other one knew right where to pick up automatically,” he said. “We always had a great working relationship and respect for each other.”

“We created a place where students felt safe, cared for and recognized for learning and where positive behaviors were supported,” Miller said. “This gave students a real desire to want to come to school.”

Through effective communication and activities, Miller and Fonzie ensured that BQJ was inviting for parents and supportive and collaborative for teachers and staff members who wanted to improve their skills in working with and teaching children.

Fonzie’s biggest challenge as assistant principal was beginning his role at age 26 and proving himself to faculty and staff who had more experience than he did in the education field.

But even at his young age, Fonzie taught Miller some lessons.

“Gerald showed me calm in stressful situations,” Miller said. “I believe he learned this in tight games when time was running out. He had the ability to know what to do under pressure.”

In return, Miller tried to model for Fonzie the importance of being available and responding promptly whenever possible to BQJ stakeholders.

“I had an open-door policy,” Miller said. “I felt it was extremely important to be out walking the halls so teachers and students saw me and knew I was there for them in whatever capacity they needed.”

Fonzie said he keeps the following advice from Miller in mind during his day-to-day work: “Always support your teachers, but never forget you have 800 students telling you that you’ve promised them a good education.”

As the new BQJ principal, Fonzie has three main goals for the upcoming school year as the COVID-19 pandemic continues.

“Keeping the students and faculty at BQJ safe is my first priority,” he said. “I also want to continue improving the level of instruction on this campus and make BQJ the place to be — a home away from home!”

As a first-year retiree, Miller’s main priorities are playing golf, spending time with his soon-to-be eight grandchildren and helping out at his wife’s store, The Mustard Seed.

“We’ve built a great bond with our teachers and staff over the years, as we worked together to make BQJ a place everyone wants to attend,” he said.

But Miller knows he’s left BQJ in good hands with Fonzie. “It will continue to be a shining light for the district, as well as the city of Nacogdoches.”