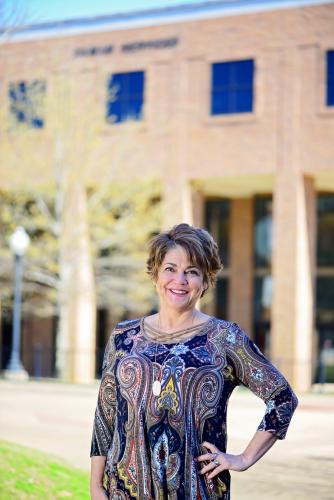 Christina Meyers, a Stephen F. Austin State University student pursuing a Master of Arts in professional counseling with a clinical rehabilitation counseling concentration, was named 2020 Master’s Student of the Year by the American Rehabilitation Counseling Association. She will receive the award at the ARCA/American Counseling Association annual meeting in April in San Diego, California. Photo by Robin Johnson

She will receive the award at the ARCA/American Counseling Association annual meeting in April in San Diego, California.

Meyers, who is originally from Bay City, said the award “means the world to me. It is life changing for me both personally and professionally.”

This is the first time an SFA student has received this honor, said Dr. Wendy Killam, professor and director of SFA’s professional counseling and rehabilitation program.

“We are so proud of Christina,” Killam said. “She exemplifies the high quality of students we have at SFA in our counseling program. This is a very prestigious and competitive award that helps bring national recognition to our program.”

The professional counseling and rehabilitation program is part of SFA’s Department of Human Services and Educational Leadership in the James I. Perkins College of Education.

Dr. Robbie J. Steward, professor and chair of the department, said Meyers “has the heart of a clinical practitioner, commitment to the field of rehabilitation counseling and knowledge base and zeal of a scholar, eager to add to the current literature.”

Meyers was encouraged to apply for the award by Dr. William Weber, professor of rehabilitation counseling at SFA, and former faculty member Dr. Yuleinys A. Castillo. Meyers’ grades, counseling skill competency and current activities were considered during the award deliberation.

“Her dedication to the rehabilitation field as a professional, a counselor in training and an advocate has shaped her motivation to help others and herself to achieve goals,” Castillo said.

Though she is thankful for the professional recognition, Meyers said, “In the field of counseling, validation comes from the growth of our customers in reaching the goals they set. My greatest success is having the privilege and honor of assisting my customers in the best and worst of times.”

Meyers was drawn to this field after 19 years of working in a hospital as a respiratory therapist.

“I became aware of the huge gap in the medical model for patient care after a life-changing event,” she said. “People need help adapting to their new normal after medical events that challenge their overall mental well-being.”

Meyers earned her Bachelor of Science in multidisciplinary studies from SFA in December 2015. She completed a concentration in allied health and an area of development in rehabilitation services as part of that degree.

She chose SFA’s professional counseling master’s program because of its seal of approval from the Council for Accreditation of Counseling and Related Educational Programs. Meyers also saw the program’s No. 1 ranking by topcounselingschools.org in 2016 for having the top-value counseling master’s degree in Texas.

“And the professors are excellent,” Meyers said. “They’re the backbone of student success.”

The Texas Workforce Commission’s vocational rehabilitation services program refers customers from Angelina and Nacogdoches counties to Meyers so she can help them seek, obtain and retain competitive, integrated employment.

Though it’s challenging to balance work and school, Meyers said, “When you’re doing what you love, the hard work is worth it.”

Earning the award would not have been possible without the help of several current and former SFA faculty members, Meyers said.

“Drs. Castillo and Weber are true mentors in the field of rehabilitation counseling, and Dr. Killam helped me understand the importance of research and ethical standards in this field.”

Meyers also wants to thank Dr. Le’Ann Solmonson, a recently retired professor in SFA’s counselor educator program, for “her expertise in counseling skills and for promoting involvement in professional associations.”

In addition, Meyers said Steward gave her deeper insight into the field with “her intuitive nature, objectivity and leadership.”

And Meyers wants to recognize the late Dr. Alan Larson, who was an associate professor of rehabilitation counseling before his death in August 2019, “for demonstrating the importance of advocacy.”

Meyers also is grateful to her family and friends who give her “unconditional love and support.”

But to her late mother and father, Gussie Mae and Cookie Baumgart, she extends the ultimate appreciation. “Those two people made me who I am. I would not be here, speaking with you, without them.”

Meyers never expected to attend college, much less earn a graduate degree, especially when her own kids were attending college. But her dad said, “It’s time for you to get that paper.”

Her parents funded her classes to become a certified respiratory therapist at Angelina College, her undergraduate degree from SFA and part of her master’s degree.

“I don’t know how a registered nurse and a Southwestern Bell repeaterman saved all that money, but they managed it,” Meyers said.

She hopes she’s given her children the same strong foundation that her parents gave her. “This whole experience — both winning this award and going back to school after starting a family and career — shows them that no matter how old you are, if you dream it, you can do it. I know it’s a cliché, but it’s true.”

Steward said she sees a rehabilitation counseling doctoral degree in Meyers’ future, as well. “This level of national recognition and affirmation is reserved for a very few and is an indicator of the degree of exceptionality among professional counseling majors.”