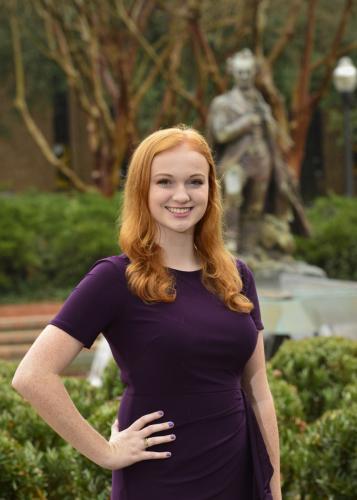 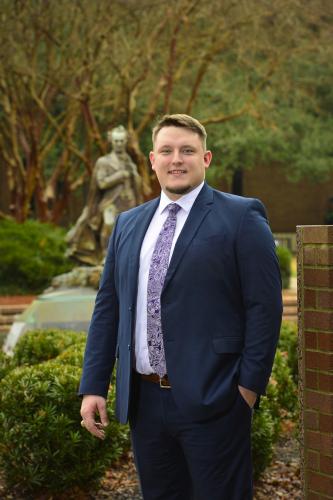 
NACOGDOCHES, Texas — Logan Ray of Lubbock and Rachel Ballback of The Woodlands have been selected as the 2020 Mr. and Miss SFA. The two Stephen F. Austin State University students will be honored during halftime of the SFA men’s basketball game against Sam Houston State University at 4:30 p.m. March 7.

Ray, who received the Stan McKewen Mr. SFA Award, is a senior music education major. A 2016 graduate of Coronado High School, he is the son of Mark and Becky Ray.

He currently serves as a second-year Orientation student coordinator, choral activities ambassador and a member of the SFA A Capella Choir, Chamber Choir and University Opera. Ray is a member of Phi Delta Theta Fraternity, having served as recruitment chair, chaplain and member of the chapter’s judicial board. He also has worked as a student assistant for choral activities and served as an Orientation leader.

“The work Logan puts into perfecting his craft as a member of SFA’s choirs is evident with his sixth-place finish in the men’s division at the National Association of Teachers of Singing Texoma Regional Competition,” said Jamal Smith, Mr. SFA ’11 and director of Orientation Programs at SFA. “Logan exemplifies the SFA Way — he cares for his peers and never hesitates to extend a helping hand to those in need.”

Ray received the SFA School of Music Scholarship and the Lubbock Classroom Teachers Association Scholarship. He plans to attend graduate school to study student affairs and higher education, and he hopes to one day work as a student affairs professional.

Ballback, who received the Arnodean Covin Miss SFA Award, is a senior health science major and psychology minor. A 2016 graduate of The Woodlands High School, she is the daughter of Frank and Carolyn Ballback.

Ballback has devoted countless hours to serving the Nacogdoches and East Texas communities. She is the executive director of internal relations for the SFA Dance Marathon, which benefits the local Children’s Miracle Network, and she is a member of Dancers Against Cancer. Ballback is a former Jack Camp counselor and a member of the Freshman Leadership Academy and National Student Speech Language Hearing Association.

She has worked as a biology supplemental instructor for the Academic Assistance and Resource Center and has been named to the President’s Honor Roll three times and the Dean’s List twice. Ballback plans to attend graduate school and study occupational therapy.

“Under her leadership, the Dance Marathon has grown from collecting a few thousand dollars its first year to significantly surpassing its audacious goal of raising $23,000,” said Dr. Adam Peck, assistant vice president for university affairs and dean of student affairs at SFA. “While she has been deeply involved in a number of student leadership experiences, Rachel also excels as a scholar maintaining a 3.9 GPA.”

The Mr. and Miss SFA titles are annually presented by the SFA Office of Student Affairs to exemplary students who well represent and promote the university. Recipients are selected based on their scholarship, participation and leadership in academic and co-curricular activities, and service and loyalty to the university. Selections are made by a committee of faculty, staff, community leaders and alumni.