Percussionist Perez to perform at SFA 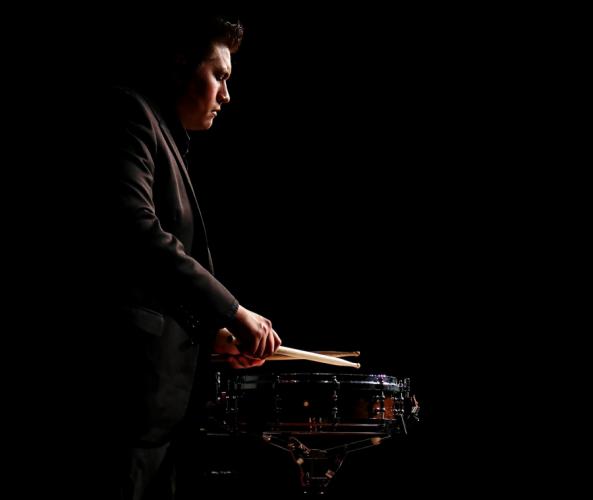 Perez is a percussionist, composer and educator from Pflugerville. He currently serves as assistant professor of music (percussion) at Lamar University in Beaumont where he oversees all aspects of the percussion studio. His performance at SFA will feature the electro-acoustic repertoire of percussion, including works he has composed or commissioned.

“I found myself particularly drawn to the rhythmic structure of his verses, and in particular his use of odd groupings,” Wharton wrote. “A particularly interesting way to listen to Kendrick is to do so while following along with the lyrics – quite often, he moves between lines or rhymes in a way that is often in contrast with the beat. This piece also owes a lot to the Armenian jazz pianist Tigran Hamasyan, whose music has been a continuous source of inspiration for me.”

Perez’s own composition “Tesseract” is also on the program. It was written for solo vibraphone and pre-recorded mallet keyboards. “‘Tesseract’ is the result of my exploration between the multiple aural ‘dimensions’ unique to these instruments and the rhythmic capabilities they so naturally manifest,” he said. "Rather than leading the listener through a programmatic narrative, the soloist acts as a sort of constant between the evolving layers and textures throughout, much like the tesseract serves as a point of reference to the fourth dimension.”

Anna Ignatowicz-Glinska’s “Toccata” was written as a farewell to the composer’s father. Of the piece, she said: “When I was writing this work, I had to 'go through my dad's life,' coming back to the times before my birth. A part of myself also changed into ashes at this moment. If there is any trace of this process in the score, it may only be the utlra-subjective narration, which individual performers may, however, understand in different ways. ‘Toccata’ is not a programmatic work and my personal comments do not relate to the details of interpretation.”

As an active performer, Perez has accepted international engagements in Guatemala, Honduras, Mexico, Spain and China and toured extensively throughout the U.S. including performances at prestigious venues such as Carnegie Hall, Merkin Hall and the Percussive Arts Society International Convention. He has performed with various professional ensembles such as the Lexington Philharmonic and the Symphony of Southeast Texas, and he is a founding member of the Percussion Quartet. Dedicated to the expansion of chamber percussion music, he  has performed throughout Colorado, Illinois, Iowa, Kentucky and Tennessee.