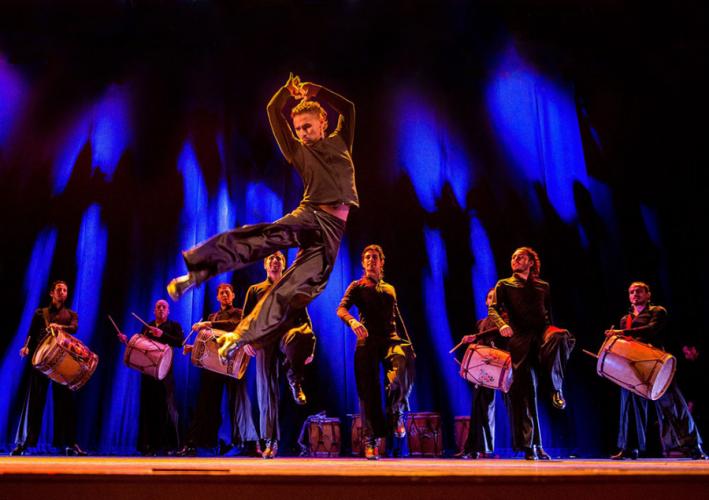 Che Malambo’s fiery melting-pot performance blends flamenco, tango, tap and Irish step dance with the drumming of traditional bombos, singing and whirling boleadoras lasso work in a phenomenon of unbridled energy that is thrilling audiences around the world, according to Scott Shattuck, associate dean of the SFA College of Fine Arts and director of the University Series. Their performance at SFA is sponsored in part by Cataract, Glaucoma, Cornea & Retina Consultants of East Texas/Benchmark Optical/Medical Arts Surgery Center.

“The company’s work and performances celebrate the unique South American cowboy tradition of the gaucho,” Shattuck said. “It’s a display of rhythmic machismo unlike any other in the world.”

Typical of the Pampas region of Argentina, the Malambo is a peculiar dance that is executed by men only. Its music has no lyrics, and it is based entirely on rhythm. Che Malambo, a powerhouse all-male company of gauchos, is directed by French choreographer and former ballet dancer Gilles Brinas. Like many who fall under the spell of traditional dances, Brinas was fascinated and troubled by the Malambo. He was drawn to the particular rhythms, the haunting characters, and the lonely expressions of the solitary gaucho. Brinas was inspired by the talented artists he found in Buenos Aires and was moved to create the company Che Malambo from the best Malambo dancers in Argentina.

After premiering in Paris in 2007 and touring around the world, Che Malambo embarked on a U.S. tour in 2013. In 2015, the company was invited to perform on the opening night of New York City Center’s annually sold-out series Fall for Dance. Since 2016, the company has performed in more than 100 cities in 11 countries in Europe, Asia and the Middle East. They have completed four North American tours and week-long runs in London, Berlin and Cologne as well as a 60-performance three-month run in Paris, France.

“In the month before they arrive in Nacogdoches,” Shattuck noted, “this troupe will perform in Montreal, Ottowa, Atlanta and three different cities in Florida. This is truly world-class cultural entertainment, not to be missed on their visit to SFA.”

Prior to the show, Sarah Sanchez, visiting lecturer in the SFA Dance Program, will present an informational talk at 7 p.m. in Griffith Gallery. The gallery is located across the hall from Turner Auditorium, which is inside the Griffith Fine Arts Building, 2222 Alumni Drive. The audience is invited back to the gallery for a post-performance reception to honor the show’s corporate sponsor, Cataract, Glaucoma, Cornea & Retina Consultants of East Texas/Benchmark Optical/Medical Arts Surgery Center.

Ticket prices are $30 for adults, $24 for seniors and $12 for non-SFA students/youth. Tickets for SFA students are $3. Discounts are also available for SFA faculty and staff members.