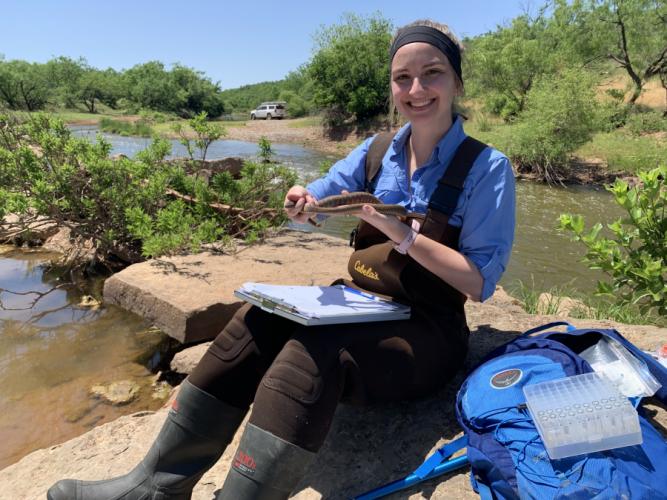 SFA biology graduate student Jessie Johnson is studying the Brazos River watersnake, one of three endemic snake species in the state, working under a grant from the Texas Parks and Wildlife Department.


NACOGDOCHES, Texas — Whether it means spending hours paddling a canoe down a river or wading into it herself, Jessie Johnson, a graduate student in Stephen F. Austin State University’s Department of Biology, is doing what she can to study and protect a threatened species of snake.

Working under a Texas Parks and Wildlife Department Conservation License Plate Grant, Johnson is studying the Brazos River watersnake and its habitat, assisting in providing an updated understanding of the snake’s occurrence and demography.

"In such cases, monitoring and management are critical to detecting declines in already small populations and anticipating the need for appropriate intervention that minimizes the chance of local extirpation," said Dr. Stephen Mullin, author of the grant.

The snake has one of the most restrictive distributions of semiaquatic species of snakes that occur across North America, found in only 11 Texas counties, and is one of three endemic snake species in Texas. Preferring shallow, fast-moving water and large, flat rocks to bask on, the snakes occupy roughly 300 kilometers of the Brazos River. Because of a continued decline in its population over the past four decades, the species has been listed as threatened by Texas Parks and Wildlife. In addition to providing updated information on the snakes’ population status, the study will help update estimates of its survivorship and detectability and will note the effects of habitat alteration on the species.

Using geographic information systems and satellite imagery, participants in the study have identified portions of the Brazos River watershed offering a suitable habitat for the snake and established transects along the Brazos River that will be surveyed by canoe or wading four times per year.

“We also document the environment in which we find them,” Johnson said. “Was it swimming? Was it basking in the sun? What was the weather like that day? It’s a lot of Gatorade and sunscreen, but it’s a really fun time.”

Johnson started conducting fieldwork in May and will continue through October 2021.

While the study means long days outside full of hard work, Johnson finds the process rewarding.

“The most challenging part is just the fact that you can put in hours and hours of work and may not actually see a single snake, but I don’t really see it as too discouraging because that is very common with reptiles,” Johnson said. “I see this whole thing as an adventure.”

Learn more about SFA’s Department of Biology at sfasu.edu/biology.