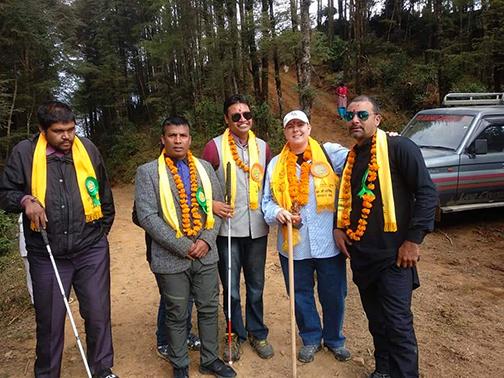 Jennifer Perry, second from right, an orientation and mobility clinical instructor and doctoral candidate in the James I. Perkins College of Education at Stephen F. Austin State University, and members of Nepal’s Bright Star Society are pictured in Panauti Village moments after a community outreach event near Kathmandu. Perry, the guest of honor, was presented a scarf, a flower laurel, a handmade wooden cane and a statue of Ganesh, a god who is credited with being able to remove obstacles. Perry continues to work with Bright Star Society to explore orientation and mobility training and other rehabilitation services for individuals who are blind in Nepal and other developing nations. Photo courtesy of Jennifer Perry


NACOGDOCHES, Texas — Bashudev Adhikari, the first son of a family in Nepal, was born blind because of a genetic condition called retinitis pigmentosa. Then the second-born son, Sushil, lost his sight at age 11 from glaucoma. Believing in a religious connection — as if his sins caused his sons’ inability to see — their father left his family to prevent any further harm to his children.

These two brothers, unlike many children who are blind in the area, had the resources to go to school. But when they arrived, their teachers, who weren’t trained to work with students who are blind, told them, “Just go home and get taken care of by your family. That’s your future.”

These words inspired Bashudev and Sushil to establish Bright Star Society in Nepal in 2013 to help bridge the gap between people with and without disabilities. The society’s motto is, “Doing the best we can with what we have with where we are.”

For those with disabilities, the society provides leadership development, assistive technology, career enhancement and other assistance like cane distribution and the transcription of restaurant menus into Braille. For those without disabilities, Bright Star Society offers information on inclusion, accessibility, universal design and volunteer opportunities.

While planning her November vacation to Nepal, Jennifer Perry, an orientation and mobility clinical instructor and doctoral candidate in the James I. Perkins College of Education at Stephen F. Austin State University, discovered Bright Star Society on Facebook and reached out to the brothers.

Soon she had an invitation to accompany Bright Star Society members to a local school that welcomes students who are blind. There, she shared information about accessibility in America. Bright Star Society also invited Perry to present at a community outreach event featuring members of the Federal Parliament of Nepal and marking the International Day of Persons with Disabilities.

Perry knew Nepal didn’t have a version of the Americans with Disabilities Act to protect people with disabilities. Truncated domes, curb cuts and other tools that help people with visual impairments navigate a city in the U.S. are not required.

“When we teach orientation and mobility in America, we are teaching the skills of the cane that relate to the laws of the land,” Perry said. “But those laws don’t apply in Nepal.”

As soon as she arrived in Kathmandu, Nepal’s capital with more than 1 million residents, Perry was struck by even greater challenges that people with visual impairments face in this region. These include the lack of health insurance and medical treatments that could help prevent, slow down or even cure the three biggest causes of blindness in Nepal: cataracts, glaucoma and retinitis pigmentosa.

Then there are the basic environmental factors. “Traffic control doesn’t exist. You can drive on either side of the road at any time of the day, either direction, and pedestrians are just expected to play Frogger when they’re crossing the street. That’s normal,” Perry said.

Plus, Nepal doesn’t have traffic lights with green, yellow and red signals — just an occasional blinking light warning drivers about an upcoming intersection. “In our way of crossing the street, we listen for the traffic to stop, and then we know we can cross,” Perry said. “Over there, the traffic is always going, especially in Kathmandu.”

The narrow sidewalks are even more perilous than the roads.

“Many of the sidewalks haven’t been repaired since an earthquake hit the region in April 2015,” Perry said. The magnitude 7.8 earthquake killed nearly 9,000 people and injured more than 22,000. An estimated 100,000 people are still living in emergency makeshift accommodations.

The sidewalks also are filled with people cooking and burning trash on open flames because the electricity isn’t reliable in the region. The many stray dogs roaming the streets, and the vendors selling their goods curbside also make it difficult for pedestrians traveling through Kathmandu.

“Even when a police officer was directing traffic, motorcycles drove up on sidewalks,” Perry added. “I asked some of the Bright Star Society associates if they ever traveled on their own, and they all said no.”

When Perry visited Sanjiwani Model Secondary School, which educates students who are blind alongside those who have sight, she met with 24 students between the ages of 6 and 16 who have visual impairments. They described teachers standing at the front of classrooms presenting lessons in a traditional manner and drawing on chalkboards.

“There’s no intervention or assistance to help students who are blind better understand the lessons,” Perry said. “There’s no model, Braille or audiobooks. Most supplies, like canes, get lost in the mail because of all the different borders they have to cross to get to Nepal. So whatever the students can grasp just through listening is what they know, but there’s no standardized test to assess that knowledge the way we have in the U.S.”

After they’ve finished school, most students said they’ll return to their families.

“So then you wonder what’s the point of their education,” Perry said. “However, it’s not like they’re really getting educated because there’s no specialized teacher for the blind, there are no tactile graphics, and there’s no orientation and mobility training.”

Without health insurance or institutions to help adults with visual impairments, families prefer to take care of their relatives with disabilities at home, which often creates more hardships for them.

“When I asked the students what help they wanted, they didn’t have an answer for me because they don’t know what the possibilities are,” Perry said.

According to Sushil, no one like Perry had visited the school before. Peace organizers had stopped by in the past, but they were working to create harmony between nations, increase inclusion on a more general scale and fight for basic human rights.

She told them about specially trained teachers, resources for those with visual impairments, college programs and mandated accessibility at universities in the U.S. “But I felt like I was depressing the students because they don’t have anything like that there.”

Then Perry explained to the students that the U.S. didn’t always have resources and laws to protect people with disabilities.

“We had to start somewhere,” she told the students. “We had to put pressure on the government and local community organizers. And that’s exactly what Bright Star Society is doing here.”

Perry continued, “I also told the students that they are a critical part of that. They can’t just be complacent and assume that this is all they’ll ever have. There’s more, and they have to keep asking for more.”

Perry also presented to residents of Panauti Village, a rural settlement southeast of Kathmandu. Members of the Federal Parliament of Nepal also attended to hear Perry, who was the guest of honor. Between earthquake recovery and the political pressures from China to the north and India to the south, parliament members have plenty to deal with, but they took the time to learn about disability activism at this community outreach event, which also built support for the International Day of Persons with Disabilities on Dec. 3.

Against the backdrop of the Himalayas, Perry talked about hope, the future and inclusion while Sushil translated her words into Nepali. “I discussed the possibilities of our working together — America and Nepal — to improve the lives of people with visual impairments,” she said.

After the presentation, “They all came up to me and wanted to kiss my hand and have me hold their children,” Perry said.

The trip also included a lunch with a local family during which Bright Star Society members worked to dispel stereotypes about disabilities in general and blindness specifically.

To help support Bright Star Society’s efforts, Perry will continue to work with the brothers through online teaching technology like Zoom and occasional visits to the region. She’s also trying to financially help the society.

“It’s not funded through the government, and it’s not registered as a private nonprofit — those don’t exist,” Perry said.

Each of the 10 people on the society’s board of directors contributes $20 a month toward the budget. “So their essential spending budget is $200, plus any other donations that come in,” Perry said. “I know it doesn’t sound like a lot, but $200 goes a lot further over there.”

Since her visit, Perry has committed to sending at least $20 every month to the society. She also has been named a disability consultant for the society, and she is working with an accountant to see how she can establish an American affiliate of Bright Star Society.

The students in Perry’s Leadership in Mobility class at SFA are helping her brainstorm a training program with global applicability.

“What would orientation and mobility look like in a developing nation? It probably wouldn’t be a college degree program,” Perry said. “It would probably be more like a six-week training seminar. Or something like Doctors Without Borders but for rehabilitative professionals.”

Assistance would include counseling for both people who are blind and their families to help with the emotional side of this disability. It also would include instruction on how to use residual sight better.

Though the challenges that Bright Star Society faces seem insurmountable, one of Perry’s students mentioned the ripple effect, which Perry said is driving her involvement with the society today.

To learn how you can help, contact Perry at perryjn1@sfasu.edu.