For SFA director of student engagement, work is based on experience 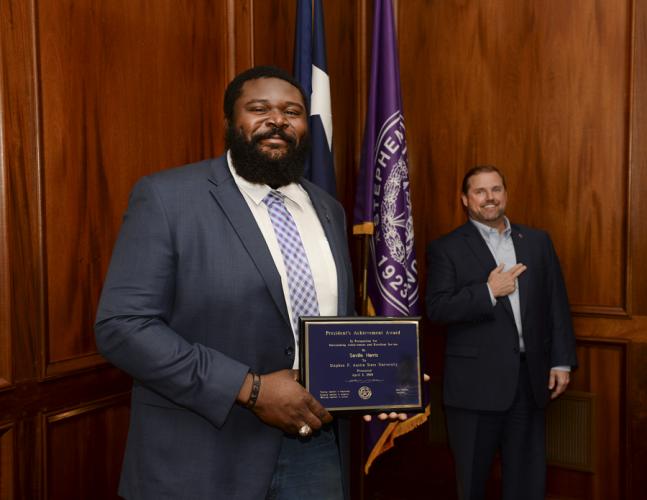 In his role as assistant director of student engagement and Greek life, and in the years leading up to his current position, Harris has befriended, inspired and even consoled hundreds of Stephen F. Austin State University undergrads.

The names and faces might change each year, but Harris’ go-to mantra remains the same: “A few simple words can make someone’s day.”

Harris is one of four President’s Achievement Award recipients for 2020, as recently announced by Dr. Scott Gordon, SFA president. Harris, known for his towering height and booming personality, has been winning campus awards since 2012. But this year, amid the COVID-19 pandemic, perhaps news of the accolade arrived a bit more sweetly than it had in the past.

The question should be, what hasn’t he done? And the simple answer is, earn his PhD. But if you ask him, that just might be the next frontier.

According to the letter of nomination, Harris is “a living, breathing definition of what SFA stands for in our mission statement and goals.” He has definitely earned that characterization, but that’s not why he came here. Harris, then a teenager coming to grips with the fact that his gridiron dreams had been shattered by a serious injury, followed his older brother Robert to Nacogdoches from hometown Livingston in 2006.

After earning his bachelor’s in 2010, he considered leaving. He applied for and received callbacks for a few jobs. But a campus contact convinced him to stay in town for his master’s, and since 2013, he has established himself as a fixture in student engagement. Along the way he fell in love and married wife Ashley, herself an SFA alumna, and had two daughters, ages 1 and 7. In his spare time, he operates a food truck, Big Fella’s BBQ, which in normal times can be found on weekends at Fredonia Brewery or the Nacogdoches Public Library.

By any measure, Harris has a great life, one that started 14 years ago when he headed north on Highway 59.

“Everything that I wasn’t, I found here,” he said.

While that may be true, it’s not the whole story.

His parents, Florida and Sylvester Harris, own and operate a restaurant in Livingston, Florida’s Kitchen. Since Harris is only 32 years old and the restaurant has been around for 35 years, it’s safe to say that Harris grew up in the hospitality industry. And that experience helped shape who he is and what he means to SFA.

“It taught me how to work with people,” he said. “You have to learn how to take the good with the bad, and learn how to make people happy. I learned that at an early age. You can always treat somebody well.”