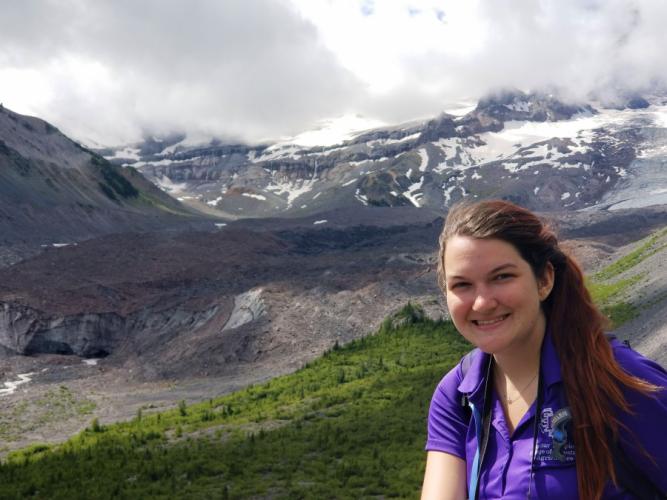 Stephen F. Austin State University environmental science graduate student Brianna Clark utilized satellite imagery and geospatial technology to calculate the change in glacial area within Glacier and Mount Rainier National Parks over a 30 year period. Her research found Glacier National Park lost 27.5%  of its glacial coverage, while Mount Rainier lost only 5.7%. Clark said the variance of glacial loss is largely the result of the difference in temperature and precipitation between the two regions where the parks are located.


NACOGDOCHES, Texas ¬— According to the U.S. Environmental Protection Agency, glaciers around the world have lost significant mass since the 1970s, due in part to warming trends in global temperatures. While the concept of massive sheets of ice may seem foreign to Texans, their importance can’t be overstated.

“Glaciers hold 75% of our fresh water, and they cover 11% of the Earth’s land area — they play a lot of different roles,” said Brianna Clark, Stephen F. Austin State University environmental science graduate student in the Arthur Temple College of Forestry and Agriculture. “For example, in some countries the glacial meltwater is a source of hydroelectric power. In some alpine communities they are the sole source of drinking water.”

Clark explained that the study of glaciers, known as glaciology, has been radically expanded thanks to satellites surveying the Earth.

In 2013, NASA and the U.S. Geological Survey launched the Landsat 8 satellite, which orbits the Earth every 99 minutes and captures approximately 740 scenes of the planet each day in nine electromagnetic spectral bands.

Clark said the bands represent different portions of the electromagnetic spectrum and have wavelengths of varying size. Researchers viewing the satellite imagery online are able to add or subtract observable bands to create ratios that improve the visibility of different landforms.

The two parks at the center of her research, Glacier and Mount Rainier National Parks, were chosen based on their representation of two distinct geographic and climactic regions known as the Intermountain Region and the Pacific Northwest.

To do this, Clark used satellite imagery to measure the glacial area of her study sites for the years 1985, 2000 and 2015. She then used contour lines to make digital elevation models in order to calculate the change in volume of the glaciers. In addition to the satellite imagery, Clark also compared climate trends between the two regions by measuring cumulative degrees above zero for each study year, as well as precipitation.

“Remotely sensed data allows a researcher to obtain information over a large geographic area within each image, sometimes from locations that a researcher would not physically be able to get to on the ground,” Unger said. “Given the large synoptic perspective within a Landsat image — approximately 13,200 square miles — obtaining ground information remotely can be cheaper than physically visiting each location. An added benefit is the digital data can be obtained over a series of dates allowing for change detection analysis, as was in the case in Brianna’s research.”

Ultimately, Clark found that within the 30-year period of the study, Glacier National Park lost 27.5% of its glacial coverage, while Mount Rainier lost only 5.7%.

“The differences in these percentages can largely be attributed to the warmer temperatures of the Intermountain Region coupled with lower amounts of snowfall compared to the Pacific Northwest,” Clark said.

She added the Earth undergoes natural cycles between warm and cool temperatures, but this typically takes place over a much longer time scale than currently being experienced.

“Glaciers melting isn’t always something to be alarmed about because it’s something that naturally occurs,” Clark said. “But given the rate at which they are decreasing, we are to some extent contributing to it through anthropogenic climate change.”

According to the U.S. Geological Survey, records of deglaciation in Glacier National Park was observed as early as 1914, corresponding with the Industrial Revolution and the beginning of global warming trends.

“In 2003, two researchers modeled glacial change within the park, simulating increases in atmospheric carbon dioxide concentrations and a 2-to-3-degree Celsius rise in temperature by 2050,” Clark said. “Based on this simulation, it is predicted that between 2030 and 2080, many of Glacier National Park’s remaining glaciers will disappear.”

As glacial research continues, Clark’s work will provide a valuable record of the state of these glaciers, as well as how geospatial technologies can facilitate similar research in the future.