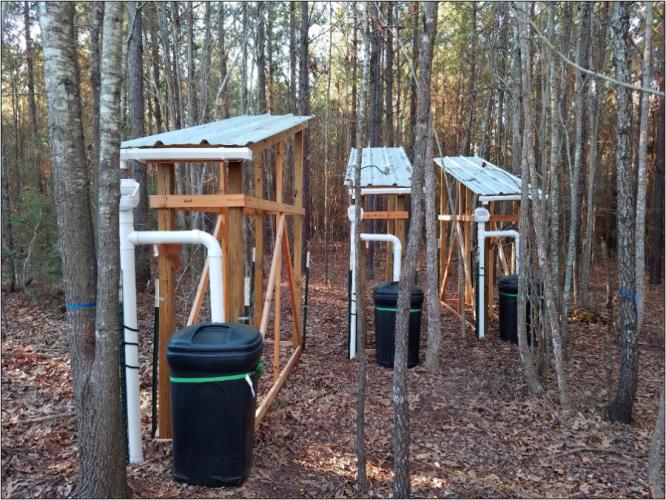 Research conducted by Stephen F. Austin State University environmental science graduate student Kimberly Gamez evaluated the effects of pine and hardwood canopy cover versus no tree cover on roof-harvested rainwater. Her results indicate that although tree canopy coverage does affect water quality, including total bacteria present, it does not pose a hindrance to the practice of rainwater harvesting. While roof-harvested rainwater used for indoor and potable use requires filtration and disinfection, untreated rainwater can be used for irrigation, outdoor water features and flushing toilets — all of which help conserve Texas’ water resources.


NACOGDOCHES, Texas — Research conducted by Stephen F. Austin State University environmental science graduate student Kimberly Gamez is adding to a growing body of work with the goal of alleviating the ever-increasing demand on one of Texas’ most precious natural resources — water.

According to the Texas Water Development Board, Texas’ population is expected to increase by more than 70 percent during the next 50 years. Accompanying this growth is increased demand on the state’s already strained water resources.

“While water does recirculate through the hydrologic cycle, the amount available that is clean enough to drink is limited,” Gamez said. “So, anything we can do to conserve it is important.”

According to the U.S. Bureau of Reclamation, although water covers 71 percent of the Earth’s surface, only 0.5 percent is available, fresh water.

Gamez said when she began researching graduate programs, she sought a professor actively looking for solutions to water supply and quality issues. This led her to Dr. Matthew McBroom, associate dean of SFA’s Arthur Temple College of Forestry and Agriculture and T.L.L. Temple professor of forestry. McBroom’s career as a hydrologist spans more than two decades, and his ongoing exploration of roof-harvested rainwater to help alleviate the demand on water resources and reduce storm water runoff piqued Gamez’s interest.

Gamez explained that while East Texas has more forest coverage than other regions of the state where rainwater harvesting is more popular, such as Central Texas, there is a nationwide push to plant more trees in residential and urban areas across the U.S. Additionally, awareness of the benefits of rainwater harvesting is increasing — even in seemingly water-rich regions such as East Texas.

“If both trees and roof harvesting of rainwater are to have a significant place in the future, the interaction between the two needs to be analyzed and quantified,” Gamez said. “Effective planning and design of collection and filtration systems for rainwater harvesting requires understanding the factors that affect harvested rainwater quality.”

Thanks to East Texas’ ample forest cover, Gamez didn’t have to look far to find the perfect study site.

Gamez installed nine metal roofs with rainwater catchment systems at the Todd Agricultural Research Center to evaluate the effects of pine and hardwood canopy cover versus no tree cover on roof-harvested rainwater quality during a period of one year. Her analysis compared these samples against Texas’ current drinking water standards.

McBroom explained that in addition to wildlife associated with tree cover, which can introduce bacteria, the tannins and other natural-occurring phytochemicals present in leaves can alter the pH of the water, causing different reactions with roofing materials. These tannins also may alter the color of the water, which might reduce the efficacy of ultraviolet filters used to disinfect rainwater harvested for potable use. Tree canopies also collect a significant amount of dust and other airborne particulates that wash off the leaves, onto the roof and into the collection tank with the onset of rainfall.

Gamez’s results indicate that none of the water collected consistently met drinking water standards. Additionally, tree overhang resulted in lower pH with higher color, as well as higher total coliform bacteria, E. coli bacteria and turbidity, which is the measure of a liquid’s clarity.

“While the changes of the season did bring certain analyte levels closer to compliance with drinking water quality standards, only color and turbidity were decreased to acceptable levels,” Gamez said.

Gamez and McBroom said this difference in bacteria levels could be the result of a number of factors, such as the buildup of organic matter on roofs located under the tree canopies.

“Overall, for water quality, the open roof system is best, but it’s not worth cutting down a tree,” Gamez said. “Approximately 95 percent of roof-harvested potable systems in Texas have a disinfectant system in addition to filtration.”

Gamez also found that diverting the first tenth-of-an-inch of rainfall out of the storage tank at the beginning of the storm, called first-flush diversion, significantly reduces the contaminant levels.

“These first-flush diverters were found to be a low-cost technology that allows the rain to wash the tree canopies and roofs before storing the cleaner water in the tanks,” McBroom said.

While rainwater harvesting systems for indoor and potable use do require a filtration and disinfection system, untreated rainwater can be effectively used for agricultural uses, irrigation, outdoor water features, flushing toilets, or any number of activities that don’t require treated water — especially if a first-flush diverter is used.

“Here in Nacogdoches, the average 2,000-square-foot home would generate almost enough water on an average year for a family of four,” McBroom said. “So, homeowners have access to free water. The other beautiful thing about the state of Texas is that roof-harvested rainwater is 100-percent property of the landowner.”

“There’s essentially no reason for homeowners not to take advantage of that resource,” McBroom said. “Even if they’re not going to use it for drinking, they can use it for lawn irrigation and so forth. That’s a great opportunity to capitalize on a resource that comes every time it rains.”

“This was one of the first studies I have been a part of where the public was excited about it,” Gamez said. “I would be purchasing supplies, and people would ask me what I was working on, and they would actually thank me for conducting this research.”

For information on past rainwater harvesting research conducted at SFA, contact McBroom at mcbroommatth@sfasu.edu or (936) 468-3301.